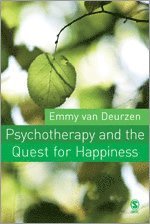 Psychotherapy and the Quest for Happiness

"A vibrant, passionate, and hugely readable text which goes to the heart of the therapeutic project: how to help clients lead fuller and more meaningful lives" - Mick Cooper, Professor of Counselling at University of Strathclyde

The unspoken yearning that brings people to therapy is often that of a desperate desire for happiness. Should therapists ignore this desire, interpret it or challenge it? And what does our preoccupation with happiness tell us about contemporary culture and the role of the therapist?

In this book, Emmy van Deurzen addresses the taboo subject of the moral role of psychotherapists and counsellors. Asking when and why we decided that the aim of life is to be happy, she poses searching questions about the meaning of life. Psychotherap y and the Quest for Happiness seeks to define what a good life consists of and how therapists might help their clients to live well rather than just in search of happiness.

This text makes stimulating reading for all trainee and practising counsellors and psychotherapists, especially those interested in the existential approach.

Emmy van Deurzen is Co-Director of the Centre for the Study of Conflict and Reconciliation, and honorary Professor at the School of Health and Related Research, University of Sheffield
Visa hela texten

Emmy van Deurzen is an international authority on existential therapy, who lectures worldwide and whose work has been translated into many languages. She is the founder and principal of the New School of Psychotherapy and Counselling in London and a visiting professor with Middlesex University. She also directs Dilemma Consultancy and the Existential Academy, in London and Sheffield. She was previously the founder and first Dean of the School of Psychotherapy at Regent's College and she was also the first chair of the United Kingdom Council for Psychotherapy. It was her initiative in forming the Society for Existential Analysis and its journal Existential Analysis, in 1988, the same year this book was first published, which established the field of existential psychotherapy and counselling in the United Kingdom.

Pandora's Box Values and Beliefs in Psychotherapy The Good Life Philosophy as a Guide to Therapy Positive Psychology Science of Well Being Predictable Difficulties Everyday Challenges Life Crisis: Triumph over Trauma Speech is Silver, Silence Golden Feelings remain Unspoken The Meaning of Being: Beyond the Quest for Happiness