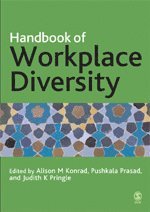 av Alison M Konrad
Inbunden Engelska, 2005-12-01
1599
Köp
Spara som favorit
Skickas inom 10-15 vardagar.
Fri frakt inom Sverige för privatpersoner.
`By assembling an international cast of contributors from all walks of research life, Professors Prasad, Pringle and Konrad successfully broaden the scope of scholarly discourse on workplace diversity. This stimulating volume considers how to define this fuzzy construct, what "differences" are more important than others, and how to make best use of alternative research methods at different levels of analysis. It reviews what we have learned about workplace diversity along several important dimensions (e.g., gender, race, ethnicity, weight, sexual orientation, disabilities, class), and it offers useful recommendations for how to conduct future research that will expand our knowledge of the implications of diversity for individuals, marginalized groups, work organizations, and societies' - Gary N Powell, Professor of Management, University of Connecticut

`In this much-needed handbook, an international collection of first-rate scholars deals incisively and perceptively with the problems of diversity, difference, inclusion, and cultural pluralism in organizations. This handbook will be invaluable for researchers and advanced students - one of those books that stays on the top of the desk, covered with bookmarks' - Joanne Martin, Stanford University

Globalization and its melting pot of different nationalities, ethnicities and cultures is attracting research that is gathering in substance and theory. A dynamic new field that represents a significant focus within management and organisation studies is emerging.

Thishandbook showcases the scope of international perspectives that exist on workplace diversity and is the first to define this hotly contested field.

Part one of the handbook dissects the theoretical reasons and shows how the study of workplace diversity follows different directions. Part two critiques quantitative and qualitative research methods within the field, while Part three investigates the parallels and distinctions between different workplace groups. Key issues are drawn together in an insightful introduction from the editors, and future directions for research are proposed in the conclusion.

Contemporary Psychology: APA Review of Books "It is, in fact, a book that every academic and practitioner alike should read. This book does a very good job of presenting a diversity of methodological approaches to the study of diversity in the workplace."

Dr. Judith Pringle is a Professor of Organisation Studies in the Management department in the AUT Faculty of Business and Law. Her specialist research interests lie in the areas of women, gender, diversity and careers. She currently teaches Gender and Diversity in Organisations at postgraduate level. She is a co-investigator on the Marsden funded grant Glamour and grind: New Creative Workers, co-editor of the Sage Handbook of Workplace Diversity (2006) and The New Careers: Individual Action and Economic Change (1999). She published chapters in edited books and wide ranging articles in journals such as Gender Work and Organization, British Journal of Management, International Journal of HRM, Journal of World Business, Personnel Review, Organization, Asia Pacific Journal of Human Resources, Women and Management Review, Women Studies Journal (NZ) and consistently contributes to international conferences. She is on the editorial board for British Journal of Management, editor for the Gender and Diversity division of Canadian Journal of Administrative Sciences and member of the European Groups of Organization Studies Standing Group on Gender and Diversity. She has four Emerald journal citations.

Judith is a Pakeha New Zealander who grew up on a sheep farm in the South Island. Her academic study began in psychology culminating in a doctorate in social psychology. Study was interrupted by OE (overseas experience) where she had 19 different jobs in a variety of countries. Before her academic career she was a self-employed consultant with large and small public and private sectors organisations.

Over the last two decades (formerly at University of Auckland) she has researched extensively issues relating to the various experiences of women in organisations. This has been an evolutionary research pathway exploring strategies used by women in male-dominated organisations, experiences of senior women managers and leaders, the functioning and cultures of Pakeha, Maori and Pacific Island women-run organisations (non-profit and business). A related research strand is how individuals change and adapt their careers to shifting job opportunities. With colleagues she has critiqued and broken open the traditional career theory to create more inclusive models that are better labelled as career-life frames.

Earlier methodologies were within a positivist paradigm while latterly she has been greatly influenced by the emergence of critical approaches. Now she researches, and supervises graduate students, working primarily in an interpretive paradigm. Data is drawn from interviews and ethnographic materials and meaning made through life history and narrative analyses.
Judith is coordinator of the Gender and Diversity Research Group, an AUT wide network of researchers