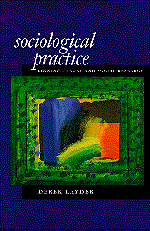 av Derek Layder
(1 röst)
Häftad Engelska, 1998-09-01
439
Köp
Spara som favorit
Skickas inom 7-10 vardagar.
Fri frakt inom Sverige för privatpersoner.
Finns även som
Visa alla 2 format & utgåvor
In this textbook, Derek Layder offers a better understanding of the links between theory and research, and provides an analysis of the relationship between the two. He develops clear usable strategies to encourage theory development in the practical context of social research, and introduces a new approach - adaptive theory - which can be used to generate new theory as well as develop existing theory in conjunction with empirical research. Layder concludes by providing an outline of new rules of sociological method that show how adaptive theory can be put into practice.

Derek Layder is Emeritus Professor of Sociology at the University of Leicester and Honorary Professor of Health and Life Sciences and De Montfort University. He was awarded a doctorate by the London School of Economics in 1976. Appointed Lecturer in Sociology at the University of Leicester in 1974 and promoted to Reader in 1995, he became Professor in 1997 and Emeritus Professor from 2002. He has held several visiting academic positions and has also held honorary visiting appointments at The Australian National University (as a Humanities Research Fellow) and the University of Western Sydney (as Eminent Research Visitor). He taught in areas of social theory, social psychology, social research methods and the philosophy of social sciences. He has published numerous academic articles and 12 books. Among his books, in the area of the philosophy of social science, he is the author of The Realist Image in Social Science (1990); in social theory, he has written Understanding Social Theory (second edition, 2006), as well as Modern Social Theory (1997). On research strategies and methods, he has authored New Strategies in Social Research (1993), Sociological Practice (1998), and Doing Excellent Small-Scale Research (2013). He has also written on intimacy, emotion and self-identity, including Emotion in Social Life (2004), Social & Personal Identity (2004) and Intimacy & Power (2009).

The links between theory and research; elements of the research process; analyzing data with theory in mind; social research and concept-indicator links; from theory to data - starting to theorize; towards adaptive theory; some new rules of method.