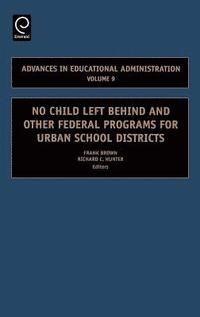 av Frank Brown, Dr Richard C Hunter
Inbunden Engelska, 2006-07-01
1419
Köp
Spara som favorit
Skickas inom 10-15 vardagar.
Fri frakt inom Sverige för privatpersoner.
The No Child Left Behind (NCLB) Act is designed to close the achievement gap between disadvantaged and disadvantaged children through its Title I program. Title I provides disadvantaged students with compensatory education. Only Title I schools are required to meet NCLB accountability guidelines but some states apply federal accountability guidelines to non-Title I schools; and states must separate achievement test scores by racial subgroups. The book explores models to achieve equity in Title I schools. The authors define what is required of states in Title I schools. The NCLB guidelines are flexible: states may confine their accountability involvement to Title I schools only and limit the number of Title I schools in their state; states may establish their own standardized tests and establish their own racial subgroups. The authors examine how each state reacts and implements NCLB accountability standards, and challenges to these guidelines in the courts and in the body politics by states. The text examines the achievements of NCLB, and the implications of the Act. The text also reviews implications for a larger immigrant population that did not exist in 1965 when Title I was originally enacted by Congress; and the impact of globalization the educational needs of the country. It explores models to achieve equity under the No Child Left Behind (NCLB) Act.
Visa hela texten

Bloggat om No Child Left Behind and other Federal Pr...

ABOUT THE AUTHORS PREFACE: By What Means? The Devil is in The Details! (Fenwick English). INTRODUCTION: NO CHILD LEFT BEHIND, SYMBOLISM OR REALITY? (Frank Brown and Richard C. Hunter) PART I: EDUCATIONAL EQUITY AND NCLB. Fiscal Equity Under Title I and Non-Title I Schools in Local School Districts. (Jim Lyons). NCLB and Diversity in Schools. (Stephen B. Lawton). School Choice and Equity under NCLB In The Post-Brown Era. (Frank Brown). No Child Left Behind: The Balm of Gilead Has Arrived in American Education. (Philip T.K. Daniel). NCLB and the New ESEA Title I Program: Poverty and Education. (Richard C. Hunter). Reconceptualizing Accountability in Urban Schools. (Carolyn Talbert-Johnson and Charles J. Russo). The No Child Left Behind Act of 2001 and Charter Schools. (Preston Green and Joseph Oluwole). Struggling to Mend it or End it: Legal and Legislative Issues in the Brief History of the No Child Left Behind Act of 2001. (Saran Donahoo and Norman Greer). Title VII, Bilingual Education of NCLB and Immigrant Students in Urban Schools. (Reynaldo Contreras). PART II: NCLB AND PROCESS Accountability, High Stakes Testing and No Child Left Behind. (Linda Tillman). Resiliency Among African American male students. (Tawannah Alan). The Achievement Gap and the No Child Left Behind Act: Is There a Connection. (Mark A. Gooden and Teresa Y. Nowlin). Public Education in an Era of Neo-Liberal Globalization: The Broken Promise of No Child Left Behind. (Jite Eferakorho). Democratic Notions Informing Equity in Mathematics Education. (Lecretia A. Buckley). Public School Choice: The New K-12 Desegregation Model? (Dawn G. Williams). The Role of Parents under NCLB. (Richard C. Hunter). Educational Equity, Globalization, and the No Child Left Behind Act. (Frank Brown). Immigration, Urban Schools, and Accountability. (Xue Lan Rong). A Nation Still at Risk: No Child Left Behind and the Salvation of Disadvantaged Students. (M. Christopher Brown II, T. E. Dancy II, & Nicole Norfles).