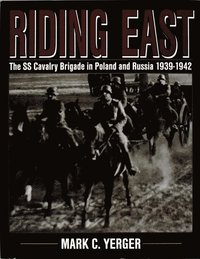 av Mark C Yerger
Inbunden Engelska, 1997-01-01
609
Köp
Spara som favorit
Riding East details the history of the previously unexamined SS Cavalry Brigade. Beginning with a background of the General SS mounted units, from which personnel formed part of the Brigade's cadre, the author details the organizations, units and commanders of these pre-war formations. A detailed biography of Hermann Fegelein, commander of the Brigade, is followed by a chapter devoted to the SS command in Poland where the Brigade operated during 1939-40 as an occupational force. The units themselves are next examined from first creation in 1939 until they divided into two regiments in 1941, including all duties and operations in Poland. Assigned to the Headquarters Staff "Reichsfuhrer-SS" at the start of the invasion of Russia, the regiments the combined with other units to form the SS-Cavalry Brigade and conducted anti-partisan warfare operations for most of the remainder of 1941. All the summer 1941 operations are examined in depth, including the massive Pripet marshes actions, using original documents from American and European archive sources. Subordinated on 1942 to Army Group "Center" the SS-Cavalry Brigade fought at the front during the massive Russian offensive in 1942 and was almost completely annihilated in the Rshev area before finally being withdrwan and used as cadre for the new SS-Kavallerie-Division. Heavily documented, the detailed text is supplemented by 109 photographs, most of which are previously unpublished. In addition, six maps, six Order of Battle charts, complete officer rosters 1939-142, feldpost numbers, details of primary commanders within the Brigade, as well information on the units and commanders it was subordinated to, complete a comprehensive history of first combat mounted unit of the SS.
Visa hela texten