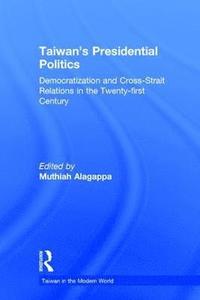 av Muthiah Alagappa
Häftad Engelska, 2001-11-01
529
Köp
Spara som favorit
Skickas inom 10-15 vardagar.
Fri frakt inom Sverige för privatpersoner.
Finns även som
Visa alla 2 format & utgåvor
The March 2000 presidential election was an important milestone in the democratic development of Taiwan, with the Kuomintang turned out of power after five decades of control and replaced by the Democratic Progressive Party. This book address the variety of effects that Taiwan's democratic development and the election will have on domestic policy in the region. Part one looks at trends and changes in Taiwan's politics and analyzes the outcome of the March 2000 election. The chapters in part two discuss the international implications of Taiwan's democratic evolution for a variety of issues, including political, economic and security relations on both sides of the Taiwan strait; Japan's foreign policy in the region; U.S. foreign policy in the region; and peace and security in Southeast Asia. The challenges and prospects for continued democratic consolidation and the implications and lessons for the PRC and Southeast Asia are also explored.
Visa hela texten

Eastern Turkestan, now known as Xinjiang or the "New Territory," makes up a sixth of China's land mass. Absorbed by the Qing in the 1880s and re-conquered by Mao in 1949, this Turkic-Muslim region of China's remote northwest borders on formerly Sovier Central Asia, Afghanistan, Kashmir, Mongolia, and Tibet. Will Xinjiang participate in China's twenty-first century ascendancy, or will nascent Islamic radicalism in Xinjiang expand the orbit of instability in a dangerous part of the world? The authors of this comprehensive survey have combined their fieldwork experience, linguistic skills, and disciplinary expertise to assemble the first multifaceted introduction to Xinjiang. The volume surveys the region's geography; its history of military and political subjugation to China; economic, social, and commercial conditions; demography, public health, and ecology; and patterns of adaptation, resistance, opposition, and evolving identities.