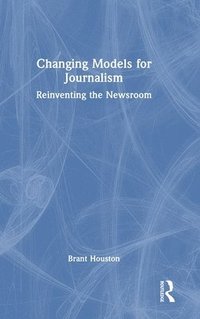 av Brant Houston
Inbunden Engelska, 2023-12-31
1089
Bevaka
Spara som favorit
Tillfälligt slut – klicka "Bevaka" för att få ett mejl så fort boken går att köpa igen.
In New Models for Journalism: Changing Paradigms, Brant Houston explores the deep transformation that journalism has undergone in the last decade. The text will provide journalism students with the background on the demise of traditional media in the U.S. with the loss of advertising, integrity, and audiences and the subsequent rise of bloggers, online community journalism, and investigative centers in the U.S. and globally. Houston discusses today's changes in journalism around the world, comparing and contrasting them with those in the U.S. New model start-ups, contemporary corporate ownership and investors, and changing streams of revenue with the expansion of new technologies will be closely examined. The text also looks at the new relationship between journalism professionals and the academy, including the surge in content and stories supplied by university-based newsrooms. Houston discusses the culture clashes and ethical dilemmas in cyber environments accompanied by new challenges to maintaining credibility and creating trust. This first book to fully explore the rapid-fire changes in news media and online journalism in recent years will help prepare budding journalists for their future careers in journalism.
Visa hela texten

Brant Houston is a Professor and the Knight Chair in Investigative Reporting at the University of Illinois, where he teaches journalism and oversees an online newsroom. An award-winning journalist, he was an investigative reporter at U.S. newspapers for seventeen years. For a more than a decade, he served as executive director of Investigative Reporters and Editors, a 5,000-member association headquartered at the University of Missouri School of Journalism, where he also taught investigative reporting. Houston has conducted more than 300 seminars for professional journalists and students in twenty-five countries, and he is a co-founder of networks of nonprofit newsrooms and educators throughout the world.