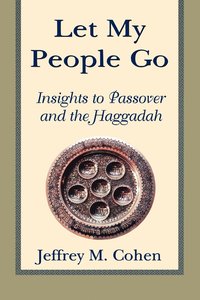 Insights to Passover and the Haggadah

av Jeffrey Cohen
Häftad Engelska, 2002-06-01
419
Köp
Spara som favorit
Let My People Go: Insights to Passover and the Haggadah offers an analysis of ancient and modern perspectives on the themes of slavery and freedom. Rabbi Jeffrey M. Cohen provides an original interpretation of the central biblical sources of Passover, with particular focus on the Haggadah and its manifold rituals. Topics discussed include, Why We Were Slaves in Egypt, Is Freedom a Jewish Concept?, The Symbolism of the Paschal Lamb, The Four Cups of Wine, The Challenge of the Omer Period, and more. Rabbi Cohen brings to the reader indispensable insights of this festive holiday, while he enriches the celebration of the Seder and enlightens the reading of the Haggadah. Rabbi Cohen currently serves as rabbi of the Stanmore Synagogue in London, England, the largest Orthodox congregation in Europe, and is a past member of the Chief Rabbi's cabinet.
Visa hela texten

About the Author Rabbi Dr. Jeffrey M. Cohen has distinguished himself in the field of religious affairs as a broadcaster, lecturer, writer, and reviewer. A graduate of Jews' College, London, and the Yeshivot of Manchester and Gateshead, he gained a first class honors degree and a master's degree in philosophy from London University and a Ph.D. from Glasgow University. He is the author of fourteen books - the most recent being Prayer and Penitence: A Commentary on the High Holy Day Machzor, Following the Synagogue Service, 1,001 Questions and Answers on Pesach, 1,001 Questions and Answers on Rosh Hashanah and Yom Kippur, as well as over 300 articles. Rabbi Cohen currently serves as senior rabbi of the Stanmore Synagogue in London, England, the largest Orthodox congregation in Europe, and is a past member of the Chief Rabbi's cabinet. He and his wife Gloria have four children and ten grandchildren.

Table of Contents Preface Foreword 1. The Fertility of the Early Israelites 2. Why We Were Slaves in Egypt 3. Is Freedom a Jewish Concept? 4. A Nation of Survivors! 5. Searching for the Chametz and the Origin of Pesach 6. The Symbolism of the Paschal Lamb 7. Why Moses is Not Mentioned in the Haggadah 8. The Four Cups of Wine 9. Four Sons or One? 10. The Son without Questions 11. Dislodging the Wicked Son's Teeth 12. "Not Just Once, but in Every Generation..." 13. R. Eleazar's Dispute with the Sages 14. A Problem Verse in Dayyenu 15. Rabban Gamaliel Used to Say... 16. The Message of Hillel's Sandwich 17. The Spirit of the Shirah 18. Marital Lessons from Shir Hashirim 19. The Challenge of the Omer Period 20. Lag b'Omer and World Reconciliation Index