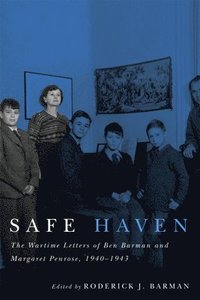 The Wartime Letters of Ben Barman and Margaret Penrose, 1940-1943

av Roderick J Barman
Inbunden Engelska, 2018-10-11
299
Köp
Spara som favorit
Skickas inom 10-15 vardagar.
Fri frakt inom Sverige för privatpersoner.
In 1940, when Hitler's tanks reached the English Channel and German bombs fell on London, the invasion of the United Kingdom seemed imminent. Among the many thousands of British children finding a safe haven during the war, Benjamin Barman was sent by his parents to stay with the Penrose family in London, Ontario. Along with Margaret Penrose, a childhood friend of his mother, Ben wrote letters to his family from 1940 until his return to England late in 1943. Transcribed and illustrated with contemporary photographs, this correspondence provides graphic insight into the trauma faced by a child refugee as he struggled to adapt to a completely new life and society far from his family. Captivating and instructive, the letters, along with detailed reports provided to Ben's parents by his host mother, speak to Canadians' unflinching support of the British despite the many deprivations and difficulties that the war inflicted on them. Introduced and extensively annotated by Ben's youngest brother, Roderick, a professional historian, Safe Haven reveals the intimate day-to-day life of one Canadian household during the Second World War and the realities of evacuated British children, their families, and the people who hosted them.
Visa hela texten

"This book will be of interest to those who would like insight into the dramatic events revealed by the letters and what they tell us about the experience of 'war guests' in Canada, a little-documented episode of the Second World War." Medicine, Conflict "Presented as a series of letters, this books tells the story of a young boy in Britain whose parents sent him to live in London, Ont., with a family friend during the Second World War. The story of his voyage to Canada alone is enough to entice you to keep reading about how he handles the psychological trauma that came with such a displacement. A gut-wrenching back-and-forth about a boy escaping war but missing his family." The Globe & Mail "Brilliantly realized, Safe Haven is a charming, lucid, and evocative book and much more than another war story. I could not put it down." Peter Neary, University of Western Ontario "Remarkably frank and insightful, Safe Haven adds to our understanding of the experience of British evacuee children." Carman Miller, McGill University

Roderick J. Barman is professor emeritus of history at the University of British Columbia.