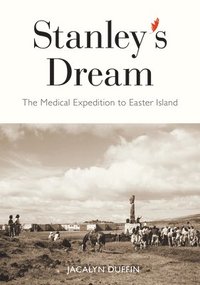 The Medical Expedition to Easter Island

av Jacalyn Duffin
Inbunden Engelska, 2019-08-30
369
Köp
Spara som favorit
In 1964-65, an international team of thirty-eight scientists and assistants, led by Montreal physician Stanley Skoryna, sailed to the mysterious Rapa Nui (Easter Island) to conduct an unprecedented survey of its biosphere. Born of Cold War concerns about pollution, overpopulation, and conflict, and initially conceived as the first of two trips, the project was designed to document the island's status before a proposed airport would link the one thousand people living in humanity's remotest community to the rest of the world - its germs, genes, culture, and economy. Based on archival papers, diaries, photographs, and interviews with nearly twenty members of the original team, Stanley's Dream sets the expedition in its global context within the early days of ecological research and the understudied International Biological Program. Jacalyn Duffin traces the origins, the voyage, the often-complicated life within the constructed camp, the scientific preoccupations, the role of women, the resultant reports, films, and publications, and the previously unrecognized accomplishments of the project, including a goodwill tour of South America, the delivery of vaccines, and the discovery of a wonder drug. For Rapa Nui, the expedition coincided with its rebellion against the colonizing Chilean military, resulting in its first democratic election. For Canada, it reflected national optimism as the country prepared for its centennial and adopted its own flag. Ending with Duffin's own journey to the island to uncover the legacy of the study and the impact of the airport, and to elicit local memories, Stanley's Dream is an entertaining and poignant account of a long-forgotten but important Canadian-led international expedition.
Visa hela texten

"Combining the history of science with the political history of the Rapa Nui, Stanley's Dream is a story about the complex and often inexplicable interactions among researchers and their research subjects on a remote colonial island, tracking the passionate love stories and the successful and failed scientific aims of a group of adventurous scientists, social scientists, and the media." Anne Kveim Lie, University of Oslo "Lively and very personal, Stanley's Dream is not just a thorough investigation into the making of colonial science but a highly original one. At times, it almost reads like a thriller as Duffin skilfully unfolds the mysteries behind the mission to Easter Island. This book is both excellent and essential." Laurence Monnais, Universite de Montreal "In her ambitious non-fiction exploration of the 1964-65 Canadian-led expedition to Easter Island, or Rapa Nui, Jacalyn Duffin makes it clear there will be no detail left unexplored, no missing bibliographic data, and certainly nothing resembling a composite. The result is a capacious book in which an old story is ushered back into the light ... Duffin achieves a fascinating bait and switch in the latter third of Stanley's Dream. A hero emerges." Literary Review of Canada

Jacalyn Duffin, physician and historian, is professor emerita at Queen's University, where she held the Hannah Chair in the History of Medicine from 1988 to 2017.