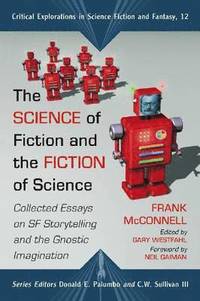 The Science of Fiction and the Fiction of Science

Collected Essays on SF Storytelling and the Gnostic Imagination

av Frank McConnell, Gary Westfahl, Donald E Palumbo, C W Sullivan
Häftad Engelska, 2009-02-15
539
Köp
Spara som favorit
Skickas inom 3-6 vardagar.
Fri frakt inom Sverige för privatpersoner.
As a member of the Pulitzer Prize jury, the late Frank McConnell helped science fiction gain standing as serious literature, evolving his presentation of the field over the course of his career. The 16 essays reveal that evolution as presented in papers at the prestigious Eaton Conferences. At first emphasizing that science fiction is primarily one of many forms of storytelling, McConnell gradually recognized science fiction as a modern expression of Gnosticism, rejecting bodily concerns for an exclusive emphasis on spirituality. McConnell's essays cover such topics as H.G. Wells, science fiction in academia, and the role of genre in storytelling. A foreword by award-winning fantasy author Neil Gaiman and tributes by noted writers such as Gregory Benford, Harold Bloom, Howard V. Hendrix, and George Slusser are also included.
Visa hela texten

Bloggat om The Science of Fiction and the Fiction of...

Frank McConnell (1942-1999) was a professor of English at Northwestern University and the University of California - Santa Barbara. He wrote a regular column on the media for Commonweal magazine, and his voluminous body of work included four detective novels and a number of academic books. Gary Westfahl teaches at the University of California, Riverside. A prolific writer and Hugo Award - nominated editor, he earned the Science Fiction Research Association's Pilgrim Award for his lifetime contributions to science fiction and fantasy scholarship. He is the author of Hugo Gernsback and the Century of Science Fiction (2007). He lives in Claremont, California. Donald E. Palumbo is a professor of English at East Carolina University in Greenville, North Carolina. He lives in Greenville. C.W. Sullivan III is also in the English department at East Carolina University.

8. From Astarte to Barbie and Beyond: The Serious History of Dolls      74

12. Alimentary, My Dear Watson: Food and Eating in Scientific and Mystery Fiction      112

15. The Missionary Physician, from Asclepius to Kervorkian      146

16. The Science of Fiction and the Fiction of Science: A Storytelling Animal in an Inhospitable World      155

A Bibliography of the Works of Frank McConnell      187