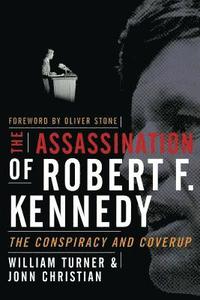 The Assassination of Robert F. Kennedy

The Conspriacy and Coverup

av William Turner, Jonn Christan
(1 röst)  |  Läs 1 recension
Häftad Engelska, 2006-10-01
329
Köp
Spara som favorit
Around midnight shortly after claiming victory in the California presidential primary on June 5, 1968, Senator Robert Kennedy walked into a deadly spray of gunfire. Immediately the Los Angeles Police Department concluded that the assassin, Sirhan Sirhan, had acted alone. The FBI conducted a parallel inquiry and concurred. And the vast majority of the American people accepted their opinion. In this compelling book--mysteriously suppressed on its initial publication--former FBI agent William Turner and investigative reporter Jonn Christian expose convincing evidence that Sirhan did not act alone. Based on more than ten years of intensive research, Turner and Christian raise serious questions about RFK's murder: -What was the virtually apolitical Sirhan's motive?-Why, if Sirhan was standing in front of his victim, were the fatal wounds in the back of Kennedy's head?-Why were there too many spent bullets (some the wrong size) for Sirhan's gun?-Did the LAPD discredit witnesses, try to make them alter their stories, and destroy key records?-Was Sirhan, in fact, a "Manchurian Candidate," programmed through hypnosis either to kill Kennedy or divert attention while others did the job?"The Assassination of Robert F. Kennedy" makes the case that the murder of RFK, and the subsequent police and government investigations, bear all the hallmarks of the conspiracy surrounding the assassination of John F. Kennedy and the resulting Warren Commission. It is a fascinating and chilling reexamination of the tragic events that undoubtedly changed the course of American history.
Visa hela texten

Jonn G. Christian, a naval airman during the Korean War, was a broadcast newsman for the American Broadcasting Company until 1966, when he developed an interest in the John F. Kennedy assassination controversy. He soon discovered that the official version (The Warren Commission Report) was untenable and sought out the involvement of high-level political leaders--including Robert F. Kennedy. William W. Turner, a Navy veteran of World War II, was an FBI special agent from 1951 to 1961 when he turned to journalism. He has written for magazines ranging from Playboy to The Nation and is the author of The Police Establishment, Deadly Secrets, and Hoover's FBI. He became involved in the assassination investigation of President Kennedy immediately after the shooting when he flew to Dallas on assignment to look into the breakdown in security.