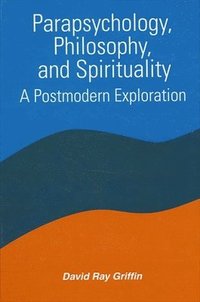 av David Ray Griffin
Häftad Engelska, 1997-01-01
489
Köp
Spara som favorit
Skickas inom 5-8 vardagar.
Fri frakt inom Sverige för privatpersoner.
In this book, David Ray Griffin, best known for his work on the problem of evil, turns his attention to the even more controversial topic of parapsychology. Griffin examines why scientists, philosophers, and theologians have held parapsychology in disdain and argues that neither a priori philosophical attacks nor wholesale rejection of the evidence can withstand scrutiny. After articulating a constructive postmodern philosophy that allows the parapsychological evidence to be taken seriously, Griffin examines this evidence extensively. He identifies four types of repeatable phenomena that suggest the reality of extrasensory perception and psychokinesis. Then, on the basis of a nondualistic distinction between mind and brain, which makes the idea of life after death conceivable, he examines five types of evidence for the reality of life after death: messages from mediums; apparitions; cases of the possession type; cases of the reincarnation type; and out-of-body experiences. His philosophical and empirical examinations of these phenomena suggest that they provide support for a postmodern spirituality that overcomes the thinness of modern religion without returning to supernaturalism. "This is a very thorough integration of the data from parapsychology, both experimental and anecdotal, into the philosophical discussions concerning the nature and role of consciousness. The scholarship is sound, and the issues raised in this book are very hot topics in the academic community, especially among philosophers and cognitive scientists". -- Richard S. Broughton, Director, Institute for Parapsychology "This elegantly written book shows a greater command of the empirical data than any otherwork on the subject by a philosopher, and no other philosophical work on the survival of death deals with the conceptual issues with greater subtlety or thoroughness". -- Stephen E. Braude, author of ESP and Psychokinesis: A Philosophical Examination and The Limits of Influen
Visa hela texten