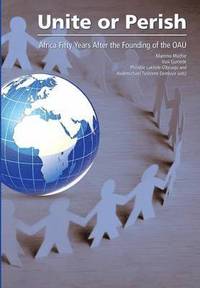 Unite or Perish. Africa Fifty Years After the Founding of the Oau

av Mammo Muchie, Vusi Gumede, Phindile Lukhele-Olorunju
Häftad Engelska, 2015-03-26
539
Köp
Spara som favorit
Skickas inom 10-15 vardagar.
Fri frakt inom Sverige för privatpersoner.
This book is an outcome of the third conference in the successful 'Scramble for Africa' International Conference series, now renamed the 'African Unity for Renaissance' International Conference. The book provides an overview and contains profound analyses of the important issues pertaining to African Unity and African Renaissance. The book is accessible to a wide variety of readers, ranging from policy makers to researchers, from teachers to students, and for anyone concerned with the further development of the African continent and Africa's renewal. The book outlines the various issues that animate Africa's stand in the global political, socio-economic, cultural and technological arenas. The chapters gathered in the book critically examine and evaluate the burning questions and challenges with which Africa is grappling. This book is one of the vital texts for understanding how Africa will manage to navigate the tumultuous waters of globalisation as Africa has just recently emerged out of the horrors of slavery, colonialism, apartheid, neo-colonialism and genocide, and is still wrestling with unceasing conflicts, popular unrest, neo-imperialism, coloniality and mushrooming insurgency. The chapters provide a much-needed insight into the issue of whether Africa has achieved genuine and meaningful independence after 50 years of the founding of the OAU and whether the baby-steps Africa has taken towards unity are worth celebrating. The contributors highlight these and allied issues with a view to capture more public attention in order to stimulate debate and usher in a new phase in the quest for African Unity and Renaissance. The contributors are distinguished authors and established and emerging scholars in their own domains. While a majority of the contributors are from the continent, distinguished scholars from around the globe have joined their African fellows in dealing with the relevant issues regarding Africa's place in an ever changing world.
Visa hela texten