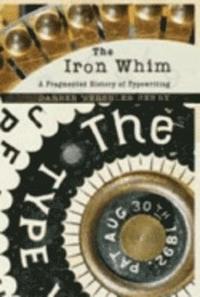 A Fragmented History of Typewriting

av Darren Wershler-Henry
Inbunden Engelska, 2007-03-01
369
Köp
Spara som favorit
The Iron Whim is an intelligent, irreverent, and humorous history of writing culture and technology. It covers the early history and evolution of the typewriter as well as the various attempts over the years to change the keyboard configuration, but it is primarily about the role played by this marvel in the writer's life. Darren Wershler-Henry populates his book with figures as disparate as Bram Stoker, Mark Twain, Franz Kafka, Norman Mailer, Alger Hiss, William Burroughs, J. G. Ballard, Jack Kerouac, Hunter S. Thompson, Northrop Frye, David Cronenberg, and David Letterman; the soundtrack ranges from the industrial clatter of a newsroom full of Underwoods to the more muted tapping and hum of the Selectric. Wershler-Henry casts a bemused eye on the odd history of early writing machines, important and unusual typewritten texts, the creation of On the Road, and the exploits of a typewriting cockroach named Archy, numerous monkeys, poets, and even a couple of vampires. He gathers into his narrative typewriter-related rumors and anecdotes (Henry James became so accustomed to dictating his novels to a typist that he required the sound of a randomly operated typewriter even to begin to compose). And by broadening his focus to look at typewriting as a social system as well as the typewriter as a technological form, he examines the fascinating way that the tool has actually shaped the creative process. With engaging subject matter that ranges over two hundred years of literature and culture in English, The Iron Whim builds on recent interest in books about familiar objects and taps into our nostalgia for a method of communication and composition that has all but vanished.
Visa hela texten

"Witty and idiosyncratic, this history of typewriting says more than one might think possible about the subject. . . . Wershler-Henry documents how the typewriter, once a dreaded totem of mechanization, has become an object of nostalgia, in a process that will surely repeat itself as technology advances. After all, as he writes, 'Typewriting died a violent death, and . . . violent deaths lead to hauntings."-The Atlantic, April 2007 "Among the book's many fascinating topics-America's early-20th-century erotic fixation on the Type-Writer Girl; the link between Remington's efforts to develop faster typists and the origins of domestic engineering, via the real-life protagonist of Cheaper by the Dozen; the mathematical formula proving that no number of monkeys could randomly peck out 'Hamlet'; the 2004 flap over the special characters used on a typewritten memo purporting to show that President Bush received preferential treatment in the Texas Air National Guard"The most persuasive is the persistence of the eerie feeling that we're not alone when we sit at the typewriter."-Josh Glenn, New York Times Book Review, May 6, 2007 "Although he sketches in the mechanical evolution of the machine, and the industrial world around it, Wershler-Henry is never reluctant to leave the historical nuts and bolts behind. His larger interest is in the cultural and theoretical resonances of typewriting, and he considers them in an impressively wide-ranging, virtuoso performance which often has a rather Gothic air about it."-Phil Baker, Times Literary Supplement, June 1, 2007 "The Iron Whim should delight all who love typewriters and who appreciate the long, if somewhat rattly, contribution they have made to literacy and general culture."-Larry McMurtry "The Iron Whim is a pure delight. This 'fragmented history of typewriting' provides fascinating glimpses into the history, culture, and poetics of the typewriter, that instrument that controlled our writing for so many decades and for which nostalgia is currently at a high point. Himself a poet and critic, Wershler-Henry recounts, with great panache, how the typewriter works of such writers as Henry James and Charles Olson were actually produced. The role of the amanuensis, the dictation process, the production and reception of typed text: all these topics, clearly and vividly detailed, ensure the wide reception The Iron Whim is sure to get. I cannot imagine a reader who would not find this book intriguing and compelling."-Marjorie Perloff, Stanford University, author of Wittgenstein's Ladder: Poetic Language and the Strangeness of the Ordinary "I have been waiting years for just such a book on the cultural imagination of the typewriter, and Darren Wershler-Henry makes the wait well worthwhile. The Iron Whim combines historical rigor, theoretical sophistication, and an amazing breadth of literary knowledge from the canonical to the avant-garde-not to mention a palpable sense of mischievous fun. Wershler-Henry, one of today's most provocative scholars and poets, undertakes this medial archaeology with unerring precision: revealing the most surprising arcana to be central to our cultural history and making the most familiar facts of the modern writing machine seem suddenly new and strange and extravagantly unlikely. This book is necessary, intelligent, and fun."-Craig Dworkin, University of Utah, author of Reading the Illegible "Who connects the typewriter with vampires, ghosts, sex, drugs, and money? Poet, theorist, and culture critic Wershler-Henry, has produced a surprising book that is nothing short of a cultural history of the complex writing machine. Richly researched, the text is composed with elan and wit. A must-read for students of contemporary literature, media studies, and anyone interested in the interconnections of modern life and technology."-Johanna Drucker, Robertson Professor of Media Studies, University of Virgin

Darren Wershler-Henry is an Assistant Professor in the Communication Studies department at Wilfrid Laurier University as well as a writer, critic, and the former senior editor of Coach House Books. He is also the author of many books, including NICHOLODEON: a book of lowerglyphs and the tapeworm foundry.