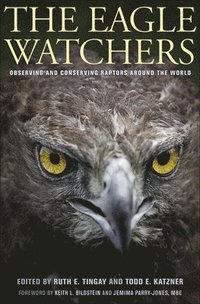 Observing and Conserving Raptors around the World

"The Eagle Watchers is literary alchemy, putting an engaging, human face to the great birds of prey that have, since the beginning of human history, awed and inspired us. It has already won a strategic spot on my bookshelf but that honor still awaits a time when the book finds itself free of my hands." -- Pete Dunne, Vice-president New Jersey Audubon Society "Eagles are the most riveting of all the world's wild birds-and eagle biologists, who brave some of the harshest conditions on the planet, are among the most intrepid of scientists. The Eagle Watchers explores the twinned worlds of observer and observed, from the rain forests of Asia, Africa and South America to the steppes of Kazakhstan and the mountains of Alaska, with dozens of ornithologists who recount experiences with poachers, land mines, wilderness camps, guerrillas and even a tense face-off between warring New Guinea tribesmen-all to learn more about some of the world's 75 species of eagles." -- Scott Weidensaul, author of <I>Of a Feather: A Brief History of American Birding</I>

Ruth Tingay is a wildlife ecologist and studies eagles in Scotland, Madagascar, Cambodia, the Solomon Islands, and Mongolia. She is the current President of the Raptor Research Foundation. Todd E. Katzner is an Adjunct Assistant Professor at the University of Pittsburgh and at Duquesne University. He studies eagles in Kazakhstan, the Philippines, and the United States. Keith L. Bildstein is Sarkis Acopian Director of Conservation Science at the Acopian Center for Conservation Learning, Hawk Mountain Sanctuary and author of books including Migrating Raptors of the World: Their Ecology and Conservation, also from Cornell. Jemima Parry-Jones, MBE, is director of the International Centre for Birds of Prey and author of books including The Really Useful Owl Guide.