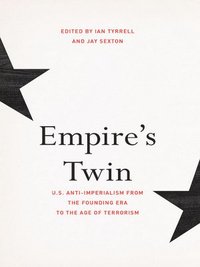 U.S. Anti-imperialism from the Founding Era to the Age of Terrorism

av Ian Tyrrell, Jay Sexton
Inbunden Engelska, 2015-03-19
709
Köp
Spara som favorit
Skickas inom 7-10 vardagar.
Gratis frakt inom Sverige över 159 kr för privatpersoner.
Finns även som
Visa alla 3 format & utgåvor
Across the course of American history, imperialism and anti-imperialism have been awkwardly paired as influences on the politics, culture, and diplomacy of the United States. The Declaration of Independence, after all, is an anti-imperial document, cataloguing the sins of the metropolitan government against the colonies. With the Revolution, and again in 1812, the nation stood against the most powerful empire in the world and declared itself independent. As noted by Ian Tyrrell and Jay Sexton, however, American "anti-imperialism was clearly selective, geographically, racially, and constitutionally." Empire's Twin broadens our conception of anti-imperialist actors, ideas, and actions; it charts this story across the range of American history, from the Revolution to our own era; and it opens up the transnational and global dimensions of American anti-imperialism. By tracking the diverse manifestations of American anti-imperialism, this book highlights the different ways in which historians can approach it in their research and teaching. The contributors cover a wide range of subjects, including the discourse of anti-imperialism in the Early Republic and Civil War, anti-imperialist actions in the U.S. during the Mexican Revolution, the anti-imperial dimensions of early U.S. encounters in the Middle East, and the transnational nature of anti-imperialist public sentiment during the Cold War and beyond.
Visa hela texten

"This rich and provocativeargument invites wide-ranging conversationabout variations and disjunctions in thehistory of anti-imperialism.... The result is anengaging collection that advances our understanding in part through its productively untidy scope." -- Mary A. Renda * Journal of American History * "Empire's Twin is an admirable collection of research with insightful conclusions that manages to cover succinctly a great deal of information. It is a noteworthy and necessary start to a trend in historiography that will hopefully begin to place American anti-imperialism alongside American imperialism in importance." -- Alex Bryne, University of Nottingham * History: Journal of the Historical Association *

Ian Tyrrell is Emeritus Professor of History at the University of New South Wales. He is the author of Reforming the World, Transnational Nation, and Historians in Public. Jay Sexton is Associate Professor of American History at Corpus Christi College, University of Oxford. He is the author of The Monroe Doctrine and Debtor Diplomacy and coeditor of The Global Lincoln.