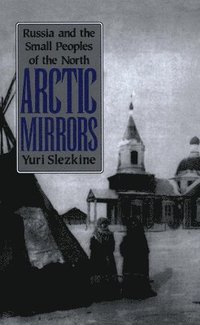 Russia and the Small Peoples of the North

av Yuri Slezkine
Häftad Engelska, 1996-10-01
309
Köp
Spara som favorit
Skickas inom 7-10 vardagar.
Fri frakt inom Sverige för privatpersoner.
Finns även som
Visa alla 3 format & utgåvor
For over five hundred years the Russians wondered what kind of people their Arctic and sub-Arctic subjects were. "They have mouths between their shoulders and eyes in their chests," reported a fifteenth-century tale. "They rove around, live of their own free will, and beat the Russian people," complained a seventeenth-century Cossack. "Their actions are exceedingly rude. They do not take off their hats and do not bow to each other," huffed an eighteenth-century scholar. They are "children of nature" and "guardians of ecological balance," rhapsodized early nineteenth-century and late twentieth-century romantics. Even the Bolsheviks, who categorized the circumpolar foragers as "authentic proletarians," were repeatedly puzzled by the "peoples from the late Neolithic period who, by virtue of their extreme backwardness, cannot keep up either economically or culturally with the furious speed of the emerging socialist society."Whether described as brutes, aliens, or endangered indigenous populations, the so-called small peoples of the north have consistently remained a point of contrast for speculations on Russian identity and a convenient testing ground for policies and images that grew out of these speculations. In Arctic Mirrors, a vividly rendered history of circumpolar peoples in the Russian empire and the Russian mind, Yuri Slezkine offers the first in-depth interpretation of this relationship. No other book in any language links the history of a colonized non-Russian people to the full sweep of Russian intellectual and cultural history. Enhancing his account with vintage prints and photographs, Slezkine reenacts the procession of Russian fur traders, missionaries, tsarist bureaucrats, radical intellectuals, professional ethnographers, and commissars who struggled to reform and conceptualize this most "alien" of their subject populations.Slezkine reconstructs from a vast range of sources the successive official policies and prevailing attitudes toward the northern peoples, interweaving the resonant narratives of Russian and indigenous contemporaries with the extravagant images of popular Russian fiction. As he examines the many ironies and ambivalences involved in successive Russian attempts to overcome northern-and hence their own-otherness, Slezkine explores the wider issues of ethnic identity, cultural change, nationalist rhetoric, and not-so European colonialism.
Visa hela texten

"This fascinating and authoritative book covers the history of relations between Russian civilization and the hunter-gatherer peoples of northern Eurasia. Slezkine charts changing Russian policies toward these circumpolar cultures beginning with the fur trade... in the eleventh century, through the expansion of the Russian empire under the tsars, to the modernization policies of the Soviets. He argues that attention to this kind of history reveals as much about the construction of Russian identity as it does about the cultural identity of the northern 'others.' This book is an important addition to the growing literature on comparative colonialisms." * Virginia Quarterly Review * "Slezkine concentrates on the changing face of the Soviet Union in the microcosm of the northern people: from 'savage Indians' to the slow evolution from icebound hunters and trappers to industrialized laborers.... An invaluable look at the people the totalitarian Soviets forgot." * Booklist * "Engagingly written and with much ironic wit throughout, Arctic Mirrors is a pleasure to read." * Journal of Historical Geography * "In this great book, Slezkine has provided us with a comprehensive history of the encounter between the Russians and the indigenous peoples of the Arctic and northwestern Pacific.... Arctic Mirrors has already become required reading for anyone interested in the history or anthropology of Siberia, and it will soon establish itself as an invaluable contribution to the growing field of studies on the newly independent states." * American Anthropologist * "This book sheds light on the history of a neglected people and reveals Russian self-perceptions refracted through the prism of their attitudes toward the natives.... It is a beautifully written, fascinating book that greatly enhances our understanding of Russia as a multiethnic state." * American Historical Review * "This enlightening book should be read by all interested in the (former) Soviet north, northern people in general, or the relation between nation states and the various 'small peoples' of the earth." * Ethnohistory *

Yuri Slezkine is the Jane K. Sather Professor of History at the University of California, Berkeley.

Introduction: The Small Peoples of the NorthPART I. SUBJECTS OF THE TSARCHAPTER 1. The Unbaptized The Sovereign's Profit The Sovereign's ForeignersCHAPTER 2. The Unenlightened The State and the Savages The State and the Tribute PayersCHAPTER 3. The Uncorrupted High Culture and the Children of Nature The Empire and the AliensPART II. SUBJECTS OF CONCERNCHAPTER 4. The Oppressed Aliens as Neighbors and Tribute Payers as Debtors The Russian Indians and the Populist IntellectualsCHAPTER 5. The Liberated The Commissariat of Nationalities and the Tribes of the Northern Borderlands The Committee of the North: The Committee The Committee of the North: The NorthPART III. CONQUERORS OF BACKWARDNESSCHAPTER 6. The Conscious Collectivists Class Struggles in a Classless Society Hunting and Gathering under SocialismCHAPTER 7. The Cultural Revolutionaries The War against Backwardness The War against EthnographyCHAPTER 8. The Uncertain Proletarians The Native Northerners as Industrial Laborers The North without the Native Northerners The Long Journey of the Small PeoplesPART IV. LAST AMONG EQUALSCHAPTER 9. The Socialist Nationalities Socialist Realism in the Social Sciences Fiction as HistoryCHAPTER 10. The Endangered Species Planners' Problems and Scholars' Scruples The Return of Dersu Uzala Perestroika and the Numerically Small Peoples of the NorthConclusionBibliography Index