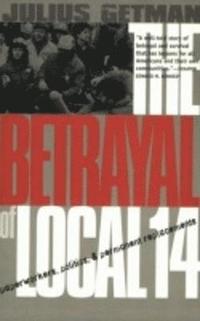 The Betrayal of Local 14

av Julius G Getman
Häftad Engelska, 1999-09-01
389
Köp
Spara som favorit
Skickas inom 5-8 vardagar.
Fri frakt inom Sverige för privatpersoner.
Finns även som
Visa alla 2 format & utgåvor
International Paper, the richest paper company and largest landowner in the United States, enjoyed record profits and gave large bonuses to executives in 1987, that same year the company demanded that employees take a substantial paycut, sacrifice hundreds of jobs, and forego their Christmas holiday. At the Adroscoggin Mill in Jay, Maine, twelve hundred workers responded by going on strike from June 1987 to October 1988. Local union members mobilized an army of volunteers but International Paper brought in permanent replacement workers and the strike was ultimately lost. Julius G. Getman tells the story of that strike and its implications-a story of a community changing under pressure; of surprising leaders, strategists, and orators emerging; of lifelong friendships destroyed and new bonds forged. At a time when the role of organized labor is in transition, Getman suggests, this strike has particular significance. He documents the early negotiations, the battle for public opinion, the heroic efforts to maintain solidarity, and the local union's sense of betrayal by its national leadership. With exceptional richness in perspective, Getman includes the memories and informed speculations of union stalwarts, managers, and workers, including those who crossed the picket line, and shows the damage years later to the individuals, the community, and the mill. He demonstrates the law's bias, the company's undervaluing of employees, and the international union's excessive concern with internal politics.
Visa hela texten

"The story of 1,200 paperworkers in Jay, Maine is perhaps best understood, not as a discrete chapter in American labor history, but as a bloody strand in the torn fabric of the American Dream at the end of the twentieth century." * The Texas Observer * "Getman's most gripping passages touch on how one employer and one sort of job can define an entire town's people. A moving and angering book, this is recommended for academic libraries and for public libraries in industrial communications." * Library Journal * "Law professor Getman focuses on paper workers' Local 14, the Androscoggin union, and offers a brilliant, layered exegesis of their ultimately unsuccessful 17-month struggle.... A well-researched journalistic account of one labor battle that sheds light on a plethora of larger themes: the strategic use of strikes; the effectiveness of corporate campaigns; the battles between local unions and large, bureaucratic internationals; the impact of a strike on every facet of community life; and the current state of the labor movement.... A call to arms for union democratization and a focused look at antilabor laws that allow hiring 'permanent replacements,' Getman's book is an extremely readable, insightful look at the plight of workers throughout the U.S." * Publishers Weekly (starred review) * "In the story of a failed strike, Jack Getman found an eloquent vehicle for expressing hope for the future of the American labor movement.... A great story filled with great characters." -- Jose M. Perez * The Working Stiff Journal, Austin, Texas * "Getman dramatically recaptures the emotions and financial tolls the strike exacted." * Booklist * "Well-written and meticulously researched.... Getman gives a gripping account of the unfolding drama.... The book is a must for American studies because of its rich insights into a Yankee community under stress, and it is a gold mine for social movement researchers because it neatly outlines the opportunity structure and chronicles the learning process of the strikers." * The Journal of American History *

Julius Getman is the Earl E. Sheffield Regents Professor at the University of Texas Law School, Austin. He is author or coauthor of eleven books.