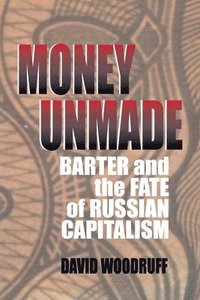 Barter and the Fate of Russian Capitalism

av David Woodruff
Häftad Engelska, 2000-05-01
479
Köp
Spara som favorit
Skickas inom 7-10 vardagar.
Gratis frakt inom Sverige över 159 kr för privatpersoner.
Finns även som
Visa alla 2 format & utgåvor
Since the collapse of the Soviet Union, Russians have seen the ruble steadily lose ground to alternative means of payment such as barter and privately issued quasi-monies. Industry now collects as much as 70 percent of its receipts in nonmonetary form, leaving many firms with too little cash to pay salaries and taxes. In this ground-breaking book on the Russian economy, David Woodruff argues that Moscow's inability to control the nation's currency is not a carry-over from the Soviet past. Rather, the Russian government has failed to build the administrative capacity and political support demanded by monetary consolidation-a neglected but crucial aspect of capitalist statebuilding. Drawing on a vast array of empirical evidence, Woodruff shows how the widespread use of barter arose as local authorities tried to protect industry against the destructive effects of price increases and crude tax and accounting systems. As businesses fled or were driven from the money economy, provincial governments invented new ways to tax in kind and issued substitutes for the ruble. In turn, the federal authorities, unable to coerce firms either to operate in the money economy or to abandon business altogether, were forced to make accommodations to barter and to ruble alternatives. Woodruff describes the enormous fiscal difficulties that resulted and recounts the intense political battles over attempts to address the problem. Through an overview of monetary consolidation in other nations, Woodruff demonstrates that the struggles of the new Russian state have much to teach us about the political history of money worldwide. Sovereignty over money cannot, he argues, be imposed by government on a recalcitrant society. Nor can it be assumed as a by-product of disciplined policies aimed at market reform. Monetary consolidation is, at heart, a political achievement requiring political support.
Visa hela texten

"At last, a book about the post-Soviet Russian economy with neither 'market' nor reform in its title.... Woodruff has delved deeply into Russia and avoids the foreign habit of analyzing the Russian transition as a policy struggle between supporters and opponents of market reform. The result is the most informative book on the Russian economy since Anders Aslund's How Russia Became a Market Economy, the optimists' handbook, appeared in 1995. Mr. Woodruff thinks too much is made of clashes between reformers and reactionaries. Russia's problems, he feels, follow from deficiencies in nation-building, not policymaking.... Money Unmade makes clear a lot of things about the Russian economy that were previously obscure. Read it, and be even more depressed than before." * The Economist * "David Woodruff's Money Unmade is one of only a few works on the post-Soviet Russian economy which seek to understand the processes unfolding in Russia in terms of the 'creation of the institutional underpinnings of capitalism.'... This book makes a major contribution to our understanding of post-Soviet Russia." -- Nicholas Kozlov, Hofstra University * The Russian Review * "In this important work, of special interest to students of the new Russian economy, Woodruff argues that efforts to refound the Russian state on a money- and market-driven political economy are far from a done deal.... Students of economic history and development will draw valuable lessons from his presentation. Policymakers ready to 'get down in the weeds' on economic issues will see that stabilizing the Russian money economy requires serious thought, political discipline, and slow-paced historical development, not external quick fixes." * Library Journal * "This is a careful narrative of Russian experiences with implementing monetary control during reform efforts in the 199's.... This is an excellent piece of scholarship. It succeeds in illustrating the complexity of formulating good policies to promote regional development and macroeconomic stability.... It would make an ideal complementary reading in advanced undergraduate and graduate level courses." -- Shirley J. Gedeon, University of Vermont * Comparative Economic Studies * "In a creative use of political sociology, Woodruff provides a highly original explanation for the rise of barter in Russia's new capitalism-and an intriguing description of the current political battle lines surrounding it." * Foreign Affairs * "In this pathbreaking book,... Woodruff employs a truly impressive range of primary sources.... Money Unmade affirms the vital importance of careful case study without retreating into disciplinary parochialism.... This is simply the best book yet published on postcommunist political economy, and it demands a close and careful reading by any scholar interested in understanding this momentous era of institutional transformation." -- Juliet Johnson, Dartmouth College * American Political Science Review *

David M. Woodruff is Associate Professor of Political Science at the Massachusetts Institute of Technology.