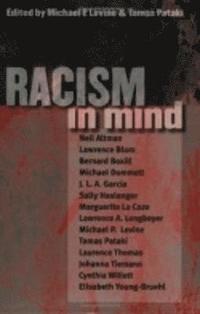 av Michael P Levine, Tamas Pataki
Häftad Engelska, 2004-03-01
329
Köp
Spara som favorit
Skickas inom 10-15 vardagar.
Fri frakt inom Sverige för privatpersoner.
Finns även som
Visa alla 2 format & utgåvor
This philosophical analysis of the phenomenon of racism brings together some of the most influential analytic philosophers writing on racism today. The introduction by Tamas Pataki outlines the historical and thematic development of conceptions of race and racism, and locates the following essays against the backdrop of contemporary reactions to that development. While the framework is primarily analytic, the volume also includes essays deeply informed by psychoanalysis, phenomenology, and feminist and social theory. The fourteen chapters in this collection address three interrelated questions: What is racism? What are the causes of racism? And what are the moral and political implications of racism? Although their approaches are wide ranging, the contributors to Racism in Mind broadly endorse a psychological-characterological approach to the understanding of many aspects of racism.
Visa hela texten

"Michael P. Levine and Tamas Pataki have assembled an outstanding collection of essays by an impressively broad group of philosophers and social theorists. This is a stimulating and conceptually wide-ranging invitation to intelligent, philosophically informed discussion about the nature, sources, and implications of racism." -- Michele M. Moody-Adams, Director and Hutchinson Professor, Ethics and Public Life, Cornell University "Philosophers are good at making many and fine distinctions. When that does not undermine our capacity to see the forest for the trees, it is a great service to thought. Racism in Mind provides such a service at a time when it is desperately needed. All the essays in it are of unusually high standard. In this book readers will find the passion and moral seriousness its subject matter deserves, but also the sobriety and discipline that it seldom gets. To read this book is to embark on an intellectual adventure. At the same time, its rigorous attention to evidence and its hard-headed explorations of the psychological and social causes of racism keep readers close to reality. For this achievement its editors deserve high praise." -- Raimond Gaita, Professor of Moral Philosophy, University of London King's College "Racism in Mind is noteworthy for its focus on racism, rather than racial categories, the concept of race, or racial identity. The greatest strength of the book is its specialized, interdisciplinary combination of philosophy and psychology. It includes specifically psychological analyses not often seen in a philosophical study of racism." -- Naomi Zack, Professor of Philosophy, University of Oregon, and author of <I>Philosophy of Science and Race</I>