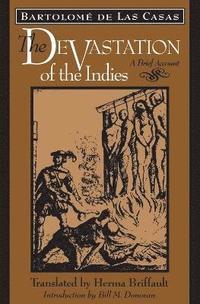 The Devastation of the Indies

av Bartolome De Las Casas
Häftad Engelska, 1992-02-01
279
Köp
Spara som favorit
Skickas inom 5-8 vardagar.
Gratis frakt inom Sverige över 159 kr för privatpersoner.
Five hundred years after Columbus's first voyage to the New World, the debate over the European impact on Native American civilization has grown more heated than ever. Among the first--and most insistent--voices raised in that debate was that of a Spanish priest, Bartolome de Las Casas, acquaintance of Cortes and Pizarro and shipmate of Velasquez on the voyage to conquer Cuba. In 1552, after forty years of witnessing--and opposing--countless acts of brutality in the new Spanish colonies, Las Casas returned to Seville, where he published a book that caused a storm of controversy that persists to the present day. The Devastation of the Indies is an eyewitness account of the first modern genocide, a story of greed, hypocrisy, and cruelties so grotesque as to rival the worst of our own century. Las Casas writes of men, women, and children burned alive "thirteen at a time in memory of Our Redeemer and his twelve apostles." He describes butcher shops that sold human flesh for dog food ("Give me a quarter of that rascal there, " one customer says, "until I can kill some more of my own"). Slave ship captains navigate "without need of compass or charts, " following instead the trail of floating corpses tossed overboard by the ship before them. Native kings are promised peace, then slaughtered. Whole families hang themselves in despair. Once-fertile islands are turned to desert, the wealth of nations plundered, millions killed outright, whole peoples annihilated. In an introduction, historian Bill M. Donovan provides a brief biography of Las Casas and reviews the controversy his work produced among Europeans, whose indignation--and denials--lasted centuries. But the book itself is short. "Were I t describe all this, " writes Las Casas of the four decades of suffering he witnessed, "no amount of time and paper could encompass this task."
Visa hela texten

Bartolome de Las Casas's critical account of the impact that the Spaniards had on the new continent has long been recognized as one of the major sources for the study on the interaction between whites and American Indians during the sixteenth century. The present translation of The Devastation of the Indies is based on the 1965 edition and appeared for the first time in 1974. The reprint is now accompanied by a penetrating introduction by Bill M. Donovan... All this makes the introduction to a provocative and stimulating essay, preparing the reader for the actual text by Las Casas. -- Albrecht Classen Journal of the Rocky Mountain Medieval and Renaissance Association [Does] justice to the heartfelt message of Bartolome de las Casas. British Bulletin of Publications