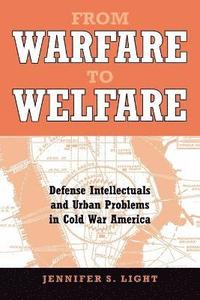 From Warfare to Welfare

av Jennifer S Light
Häftad Engelska, 2005-09-01
309
Köp
Spara som favorit
Skickas inom 7-10 vardagar.
Gratis frakt inom Sverige över 159 kr för privatpersoner.
Finns även som
Visa alla 2 format & utgåvor
During the early decades of the Cold War, large-scale investments in American defense and aerospace research and development spawned a variety of problem-solving techniques, technologies, and institutions. From systems analysis to reconnaissance satellites to think tanks, these innovations did not remain exclusive accessories of the defense establishment. Instead, they readily found civilian applications in both the private and public sector. City planning and management were no exception. Jennifer Light argues that the technologies and values of the Cold War fundamentally shaped the history of postwar urban America. From Warfare to Welfare documents how American intellectuals, city leaders, and the federal government chose to attack problems in the nation's cities by borrowing techniques and technologies first designed for military engagement with foreign enemies. Experiments in urban problem solving adapted the expertise of defense professionals to face new threats: urban chaos, blight, and social unrest. Tracing the transfer of innovations from military to city planning and management, Light reveals how a continuing source of inspiration for American city administrators lay in the nation's preparations for war.
Visa hela texten

An exceptionally useful contribution to the history of American cities, a book that takes seriously and does much to document the historical relationship between militarism and urban geography. -- Matthew Farish Professional Geographer 2004 As historians of American cities stumble across missile experts straying far from their silos, they will find guidance in this careful account of a peculiar moment in urban policy. -- Zachary M. Schrag Technology and Culture 2004 A very interesting book about the way in which American institutions get bamboozled into adopting popular fads and trends that ought to be scrutinized more carefully. -- Roger W. Lotchin Journal of Military History 2004 Light stands some of the conventional Cold War wisdom on its head... This study not only closes the loop between business management and the military back to the civilian sector, but also reminds readers of the continuing nature of unintended consequences that flow from expert technological obsessions when allied to policy making. Choice 2004 If the volume tells us something new and important about the history of planning, it is at the same time a cautionary tale, one that might well offer lessons to those today who are proposing many related technologies-geographic information systems, remote surveillance systems and the like-as a means for solving urban and military problems. -- Michael R. Curry New Media and Society 2004 A compelling historical narrative that exposes a little-known linkage between defense and civilian affairs: the urban-planning applications of technologies and management styles that were developed originally for national defense. Journal of Planning Education and Research In this superbly written intellectual history, Jennifer Light describes the impact on urban planning of the cybernetic revolution, which advanced a general theory of biological and machine communications after World War II. Peace and Change 2005 Light has made an important contribution by showing how defense intellectuals contributed to the creation and promotion of cybercities. -- Nils Gilman Journal of Cold War Studies 2006 This well-written study introduces a new and important cast of urban decision-makers to the story of post-war urban America. -- Margaret Pugh O'Mara Urban History 2006 A strong and useful contribution to American Cold War history, and perhaps even more to an understanding of the nature of American power after the Cold War. -- Campbell Craig American Historical Review 2007

Jennifer S. Light is an associate professor of communication studies, history, and sociology at Northwestern University.