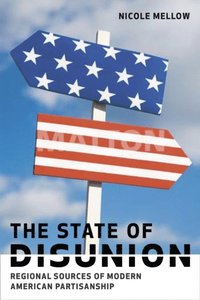 av Nicole Mellow
E-bok (EPUB - DRM), Engelska
259
Ladda ned
Spara som favorit
Laddas ned direkt
Läs i vår app för iPhone, iPad och Android
Finns även som
Visa alla 2 format & utgåvor
Why are some eras of American politics characterized by broad, bipartisan harmony and others by rancorous partisanship? In The State of Disunion, Nicole Mellow argues that these oscillations are a product of how the two major parties respond, or fail to respond, to the demands of regional constituents. While scholars have long believed that in the twentieth century the nation supplanted regions as the engine of American politics, Mellow uncovers a contrary dynamic. She shows the ways that the clashes and confluences of regional interests reconstruct the nation. By giving regions pride of place, The State of Disunion offers a compelling explanation of how America went from the consensus of the early post-World War II decades to a fractured, &quotered versus blue&quote country at the close of the twentieth century. According to Mellow, regions remain a vital consideration in electoral battles because they fuse material and ideological expectations of voters. This wide-ranging analysis of congressional battles over trade, welfare, and abortion since the 1960s demonstrates how regional economic, racial, and cultural divisions have configured national party building and today's legislative conflicts and how these divisions will continue to shape American politics for years to come.The State of Disunion broadens social scientists' understanding of American politics by displaying the conceptual insights of political geography combined with the rich tapestry of political history. Mellow offers a new way to comprehend the meaning and significance of American partisanship for our time and for the future.
Visa hela texten