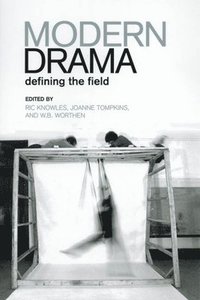 av Ric Knowles, Joanne Elizabeth Tompkins, W B Worthen
Häftad Engelska, 2003-12-01
359
Köp
Spara som favorit
Finns även som
Visa alla 2 format & utgåvor
Theatre, like other subjects in the humanities, has recently undergone quintessential changes in theory, approach, and research. Modern Drama - a collection of twelve essays from leading theatre and drama scholars - investigates the contemporary meanings and the cultural and political resonances of the terms inherent in the concepts of 'modern' and 'drama,' delving into a range of theoretical questions on the history of modernism, modernity, postmodernism, and postmodernity as they have intersected with the shifting histories of drama, theatre, and performance. Using incisive analyses of both modern and postmodern plays, the contributors examine varied topics such as the analysis of periodicity; the articulation of social, political, and cultural production in theatre; the re-evaluation of texts, performances, and canons; and demonstrations of how interdisciplinarity inflects theatre and its practice. Including work by Sue-Ellen Case, Elin Diamond, Harry J. Elam Jr, Alan Filewod, Erika Fischer-Lichte, Stanton B. Garner Jr, Shannon Jackson, Loren Kruger, Josephine Lee, David Savran, Michael Sidnell, and Ann Wilson, the collection highlights the importance of continuing to investigate not only critical texts but also the terms of the debate themselves. Incorporating both drama history and modern studies, this compilation will be an invaluable work to all scholars of theatre and drama, and as well as those students of the humanities and modernism.
Visa hela texten