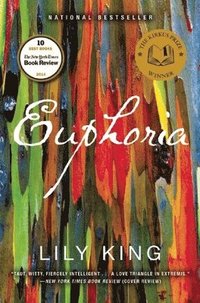 av Lily King
Inbunden Engelska, 2014-06-19
239
Köp
Spara som favorit
Skickas inom 5-8 vardagar.
Fri frakt inom Sverige för privatpersoner.
Beställ boken senast tisdag 15 december kl. 11:30 för leverans innan julafton
Finns även som
Visa alla 5 format & utgåvor
From New England Book Award winner Lily King comes a breathtaking novel about three young anthropologists of the '30's caught in a passionate love triangle that threatens their bonds, their careers, and, ultimately, their lives. English anthropologist Andrew Bankson has been alone in the field for several years, studying the Kiona river tribe in the Territory of New Guinea. Haunted by the memory of his brothers' deaths and increasingly frustrated and isolated by his research, Bankson is on the verge of suicide when a chance encounter with colleagues, the controversial Nell Stone and her wry and mercurial Australian husband Fen, pulls him back from the brink. Nell and Fen have just fled the bloodthirsty Mumbanyo and, in spite of Nell's poor health, are hungry for a new discovery. When Bankson finds them a new tribe nearby, the artistic, female-dominated Tam, he ignites an intellectual and romantic firestorm between the three of them that burns out of anyone's control. Set between two World Wars and inspired by events in the life of revolutionary anthropologist Margaret Mead, Euphoria is an enthralling story of passion, possession, exploration, and sacrifice from accomplished author Lily King.
Visa hela texten

Winner of the 2014 Kirkus Prize Winner of the 2014 New England Book Award for Fiction A Finalist for the National Book Critics Circle Award New York Times Book Review 10 Best Books of 2014; TIME Top 10 Fiction Books of 2014; New York Times Book Review 100 Notable Books of 2014; NPR Best Books of 2014; Entertainment Weekly's 10 Best Fiction Books of 2014; Washington Post Top 50 Fiction Books of 2014; Kirkus Best of 2014; Amazon 100 Best of 2014 #16; Publishers Weekly Best Fiction Books of 2014; Our Man in Boston's Best of 2014; Oprah.com 15 Must Reads of 2014; Buzzfeed 32 Most Beautiful Book Covers of 2014; A Vogue Top 10 Book of 2014; A New York magazine Best Book of the Year; Seattle Times Top Books of 2014; San Francisco Chronicle Top 10 Books of 2014 "Euphoria is a meticulously researched homage to Mead's restless mind and a considered portrait of Western anthropology in its primitivist heyday. It's also a taut, witty, fiercely intelligent tale of competing egos and desires in a landscape of exotic menace--a love triangle in extremis...The steam the book emits is as much intellectual as erotic...and King's signal achievement may be to have created satisfying drama out of a quest for interpretive insight...King is brilliant on the moral contradictions that propelled anthropological encounters with remote tribes...In King's exquisite book, desire--for knowledge, fame, another person--is only fleetingly rewarded."--Emily Eakin, New York Times Book Review (cover review) "It's refreshing to see the world's most famous anthropologist brought down to human scale and placed at the center of this svelte new book by Lily King. "Euphoria" is King's first work of historical fiction. For this dramatic new venture, she retains all the fine qualities that made her three previous novels insightful and absorbing, but now she's working on top of a vast body of scholarly work and public knowledge. And yet "Euphoria" is also clearly the result of ferocious restraint; King has resisted the temptation to lard her book with the fruits of her research. Poetic in its compression and efficiency, "Euphoria" presumes some familiarity with Mead's biography for context and background, and yet it also deviates from that history in promiscuous ways...King keeps the novel focused tightly on her three scientists, which makes the glimpses we catch of their New Guinea subjects all the more arresting...Although King has always written coolly about intense emotions, here she captures the amber of one man's exquisite longing for a woman who changed the way we look at ourselves."--Ron Charles, Washington Post "Atmospheric and sensual, with startling images throughout, Euphoria is an intellectually stimulating tour de force."--NPR.com "This novel is as concentrated as orchid food, packing as much narrative power and intellectual energy into its 250 pages as novels triple its size." --Marion Winik, Newsday "Euphoria is at once romantic, exotic, informative, and entertaining."-- Reader's Digest summer reading list) "It's smart and steamy and like the best historical fiction, it made me want to read about Mead."--USA Today's Summer's Hottest Titles "This year's winner Book I Read In One Sitting Because I happened to Read The First Page...a novel of ideas and also a novel of emotions: the titular one but also envy, hubris, despair, and above all desire--how liberating or scandalous it can be, how linked to intellect, how dictatorial."--Kathryn Schulz, New York, Best Books of the Year "King reveals a startlingly vulnerable side to Mead, suggesting an elegant parallel between novelist and archeologist: In scrutinizing the lives of others, we discover ourselves."--Vogue Top 10 Books of 2014 "Enthralling . . . From Conrad to Kingsolver, the misdeeds of Westerners have inspired their own literary subgenre, and in King's insightful, romant

Lily King's first novel, The Pleasing Hour won the Barnes & Noble Discover Award and was a New York Times Notable Book and an alternate for the PEN/Hemingway Award. Her second book, The English Teacher, was a Publishers Weekly Top Ten Book of the Year, a Chicago Tribune Best Book of the Year, and the winner of the Maine Fiction Award. Father of the Rain was a New York Times Editors' Choice, a Publishers Weekly Best Novel of the Year, and winner of the 2010 New England Book Award for Fiction. Lily King lives with her family in Maine.