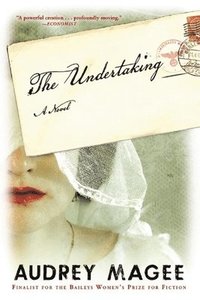 av Audrey Magee
Häftad Engelska, 2015-09-15
182
Köp
Spara som favorit
Finns även som
Visa alla 3 format & utgåvor
A finalist for the 2014 Baileys Women's Prize for Fiction "Impressive. Magee's terse style, cross-cutting between the narratives of Katharina and Peter, generates its own tension and momentum."--New York Times Book Review "Bare, brutal...told with a sharply focused simplicity that both exposes and condemns through its understatement."--Kirkus Reviews Lauded by New York Times bestselling writer Chris Cleave as "outstanding" and finalist for the Baileys Women's Prize for Fiction, The Undertaking is a remarkable debut novel from enticing new voice in fiction, Audrey Magee. Set during World War II amid the trenches of the Eastern front and the turmoil of Berlin under the Third Reich, The Undertaking follows the lives of an ordinary German soldier Peter Faber, as he approaches Stalingrad, and his new wife, Katharina Spinell, who, goaded on by her delusional parents, ruthlessly works her way into Nazi high society with tragic consequences. This is an unforgettable and elegant novel of marriage, ambition, and the brutality of war from one of our finest new writers. "This is a devastating but quite stunning first novel."--Minneapolis Star Tribune "A bold, honest novel about Nazi greed and moral blankness...Magee's cool, precise tone recalls Hans Fallada's Alone in Berlin, and, like Heinrich Boell, Magee is haunted by the everyday and the small people who are inseparably part of a great ravagement."--Helen Dunmore, The Guardian (UK)
Visa hela texten

Praise for THE UNDERTAKING: Longlisted for the 2015 Walter Scott Prize for Historical Fiction A Finalist for the 2014 Baileys Women's Prize for Fiction "To write a story that doesn't allow for much sympathy, that keeps readers at a remove from the central characters, is one of the greatest challenges an author can undertake. That Magee succeeds as well as she does is impressive. Her terse style, cross-cutting between the narratives of Katharina and Peter, generates its own tension and momentum. Although Magee stays on the surface of things, she gives those surfaces traction and textures: The face of grief, dull and yet affecting...We can't see inside Peter and Katharina, but, then again, history is partly the story of people who don't look inside themselves."--Louise Thomas, New York Times Book Review "A common structural problem for a novel comprising two perspectives is that one tends to be more absorbing than the other. Not so here. Magee skillfully distributes equal weight, meaning equal pathos and intensity...Magee adds layer upon layer of moral complexity...Deeply impressive...Magee gives us an uneasy read, but it is hard to pull away. This is a devastating but quite stunning first novel."--Malcolm Forbes, Minneapolis Star Tribune "Irish journalist Magee's first novel depicts with uncanny perception the rigors of war contrasted with life on the home front. Her compelling but realistic love story presents characters for whom most readers will feel little sympathy because of their unquestioning belief in the German cause, yet the story is all the more fascinating as related entirely from the Nazi viewpoint. Highly recommended; this is one of the most riveting accounts of love in time of war that this reviewer has ever read."--Library Journal (starred review) "A bold, honest novel about Nazi greed and moral blankness...Magee's cool, precise tone recalls Hans Fallada's Alone in Berlin, and, like Heinrich Boell, Magee is haunted by the everyday and the small people who are inseparably part of a great ravagement."--Helen Dunmore, The Guardian (UK) "A powerful creation. Its denouement, which dramatizes the brutal behavior of Russian troops as they advance into a stricken Germany at the end of the war, is profoundly moving. Ms Magee's willingness to examine the darkest elements of the conflict in a novel that still asserts the redeeming power of love is commendable. We should keep an eye out for her future work."--The Economist "Sweeping, powerful, epic...Magee's writing is fast-moving, with a great visual sense, and conversations so believable that you can almost hear them."--Kate Saunders, The Times (UK) "A powerful and unusually intimate glimpse into lives we rarely read about in fiction--direct, shocking, unflinching."--Frances Itani "The Undertaking is written with sympathy and skill. The narrative is tense and engaging, filled with complex undertones, impelled by an urgency and a deep involvement with the characters."--Colm Toibin "Absorbing... original...eloquent... a poignant reminder of the ferocious struggle for Stalingrad and its aftermath. [A]n impressive debut."--Lucy Popescu, The Independent (UK) "A violent, elegant, unsentimental journey through hell and halfway back. This is an outstanding novel by a writer of huge talent and unusual candour."-- Chris Cleave, author of the international bestseller The Other Hand/Little Bee "This is Audrey Magee's first book - and a foray into a hotly contested historical event, the Battle of Stalingrad. She makes it fresh through a tight focus on the alternating experiences of Peter and Katharina, cleverly resisting the temptation to describe places and events beyond their necessarily circumscribed viewpoints.Magee makes exciting use of dialogue...the voices shine from the page...The Undertaking is an engaging and beautifully written novel, with an emoti

Audrey Magee worked for twelve years as a journalist and has written for, among others, The Times, The Irish Times and the Guardian. She studied German and French at University College Dublin and journalism at Dublin City University. She lives in Wicklow with her husband and three daughters. The Undertaking is her first novel.