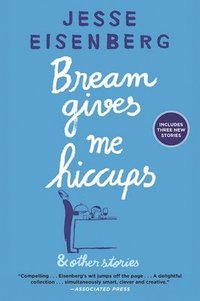 av Jesse Eisenberg
Häftad Engelska, 2016-08-25
161
Köp
Spara som favorit
Skickas inom 7-10 vardagar.
Gratis frakt inom Sverige över 159 kr för privatpersoner.
Finns även som
Visa alla 3 format & utgåvor
Known for his iconic film roles but also for his regular pieces in the New Yorker and his critically acclaimed plays, Eisenberg is an emerging literary voice. Taking its title from a group of stories that begin the book, Bream Gives Me Hiccups moves from contemporary L.A. to the dorm rooms of an American college to ancient Pompeii, throwing the reader into a universe of social misfits, reimagines scenes from history, and ridiculous overreactions. In one piece, a tense email exchange between a young man and his girlfriend is taken over by his sister, who is obsessed with the Bosnian genocide (This situation reminds be of a little historical blip called the Karadordevo agreement); in another, a college freshman forced to live with a roommate is stunned when one of her ramen packets goes missing (She didn't have "one" of my ramens. She had a chicken ramen); in another piece, Alexander Graham Bell has teething problems with his invention (I've been calling Mabel all day, she doesn't pick up! Yes, of course I dialed the right number--2!). In these forty-four stories, Eisenberg combines personal elements with highly imaginative settings, combining tenderness with a tragedy that lurks behind the jokey humor. The pieces, wryly amusing as single stories, become as a whole a touching exploration of the psychology of their protagonists. United by Eisenberg's gift for character, and grouped into chapters that open with illustrations by award-winning cartoonist Jean Jullien, the witty and moving pieces collected in Bream Gives Me Hiccups explore the various insanities of the modern world, and mark the arrival of a talented, self-ironic, and original writer.
Visa hela texten

Praise for Bream Gives Me Hiccups A Fall Books Preview Selection by Audible One of the Wall Street Journal's 15 Books to Read This Fall One of USA Today's Weekend Picks for Book Lovers One of People's Best New Books "Eisenberg has a terrific ear, especially for adolescent inflections, absurdity, self-delusion, and insecurity. He also has a flair for off-the-wall ideas . . . With its panoply of neurotics and narcissists and its smart mix of stinging satire and surprising moments of sweetness, Bream Gives Me Hiccups brings to mind fellow comic actor/writers Woody Allen, Steve Martin and B.J. Novak. It also offers a youthful new twist on what one of Eisenberg's hopeless dreamers refers to--ironically, of course--as the cruel 'irony of life.'"--NPR Books "Compelling . . . A fascinating look into the minds of misfits . . . Whether it's Alexander Graham Bell bumbling through his first phone calls or Carmelo Anthony of the New York Knicks pacifying a fan, Eisenberg's ability to create interesting and entertaining dialogue as if the exchange actually occurred is impressive . . . Eisenberg's wit jumps off the page . . . Bream Gives Me Hiccups is a delightful collection of awkward scenarios twisted into humorous, witty and sometimes poignant life lessons. It's simultaneously smart, clever and creative."--Associated Press "Eisenberg's strength is in dialogue and monologue, and in writing miserable characters who alternately compel (like a 9-year-old from a broken home who writes restaurant reviews) and repel (like Harper, the footnote-obsessed freshman Eisenberg lovingly describes as 'maladjusted') . . . Eisenberg is uncannily good at capturing a specific breed of insincere teen girl."--Entertainment Weekly "Fans of writing by Woody Allen and B.J. Novak will revel in these hilarious pieces by actor-playwright Eisenberg. Light or dark but never sweet, each is inventive . . . Relationships gone haywire provide many of the best jokes. It's a hoot."--People (The Best New Books) "A great book . . . The first part of the book [is] a series of restaurant reviews Eisenberg writes in the voice of a privileged nine-year old. The reviews are hilarious but gradually reveal a moving portrait of a lonely boy's bond with his single mom. All the stories seem to work on multiple levels like that."--Arun Rath, "All Things Considered," NPR "I love it."--Diane Rehm, Diane Rehm Show "An alphabet soup of sketches, riffs, and innovations . . . Eisenberg is funny . . . with wit and insight beyond his 31 years . . . These stories remind me . . . of Steve Martin in the way they often subvert comic convention and, more significantly, in how the author empathizes with his characters . . . Eisenberg's empathy, even more than his intelligence and wit, make him an artist worth watching."--Seattle Times "Bream Gives Me Hiccups & Other Stories features a mixture of humor and sad stories . . . In his new collection . . . Eisenberg has some wicked fun with limousine liberals, the young and overly educated, and others from demographic groups in urgent need of satire. Yet he does so with surprising compassion and a deep feeling for the pain of human disconnectedness."--Chicago Tribune "It's no surprise, perhaps, that the actor's short stories read like scenes. What may be a surprise, however, is Eisenberg's deft talent for playfully bringing both familiar and wholly original scenarios to life."--Marie Claire (What We're Reading) "Jesse Eisenberg is as unpredictable on the page as he is on screen . . . Eisenberg's perversely dark sense of humor gives stories bite, and the collection's loose structure--split into nine sections, some lasting only a few pages--makes it a brisk, approachable read . . . It's a confident step forward for Eisenberg as a writer and should pave the way for a more formal novel, with any luck."--USA Today "A shor

Jesse Eisenberg is an Academy Award-nominated actor, playwright, and contributor for the New Yorker and McSweeney's. He is the author of three plays, Asuncion, The Revisionist, and The Spoils, which won the Theatre Visions Fund Award. Eisenberg's acting credits include The Social Network, Now You See Me, Adventureland, The Squid and the Whale, The Double, and The End of the Tour. Forthcoming acting credits include Batman v. Superman.