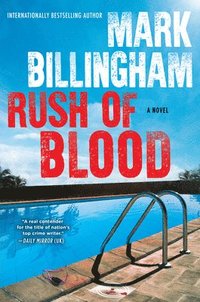 av Mark Billingham
(1 röst)
Häftad Engelska, 2018-03-08
179
Köp
Spara som favorit
Skickas inom 5-8 vardagar.
Fri frakt inom Sverige för privatpersoner.
Finns även som
Visa alla 3 format & utgåvor
"It's maddening, the way Billingham keeps us in suspense . . . but we wouldn't want it any other way."--Marilyn Stasio, New York Times Book ReviewIn the standalone novel Rush of Blood, internationally bestselling author Mark Billingham puts a sinister twist on a deceptively innocent topic: the beach vacation. Three British couples meet around the pool on their Florida holiday and become fast friends. But on Easter Sunday, the last day of their vacation, tragedy strikes: the fourteen-year-old daughter of an American vacationer goes missing, and her body is later found floating in the mangroves. When the shocked couples return home to the U.K., they remain in contact, and over the course of three increasingly fraught dinner parties they come to know one another better. But they don't always like what they find. Buried beneath these apparently normal exteriors are some unusual kinks and unpleasant vices. Then, a second girl goes missing, in Kent--not far from where any of the couples lives. Could it be that one of these six has a secret far darker than anybody can imagine? Ambitiously plotted and laced with dark humor, Rush of Blood is a first-rate suspense novel about the danger of making new friends in seemingly sunny places.
Visa hela texten

Praise for Rush of Blood "[A] savage satire about good friends whose special bond originated in murder . . . It's maddening, the way Billingham keeps us in suspense, cringing from each character while keeping watch as if our own lives depended on it--but we wouldn't want it any other way."--Marilyn Stasio, New York Times Book Review "An absorbing psychological thriller. The chilling plot realistically intensifies as true personalities are revealed . . . Billingham's affinity for delving deep into psyches shines in the enthralling Rush of Blood, as he proves that sometimes the most domestic of situations can be the most chilling."--Oline H. Cogdill, Associated Press "Hugely effective and entertaining . . . many twists and shocks."--Times (UK) "The twists and turns are smart and original, but more than that, Billingham is one of a handful of authors whose words flow as smoothly as his plot."--Sunday Express (UK) "Mark Billingham takes us on a very unhappy holiday in this sizzling thriller that starts in Florida and moves back to Britain . . . Billingham is brilliant with both characters and narrative and he's at his very best in this very sad tale of love and loss."--Globe & Mail (Canada)"Billingham does a tantalizing job of centering the smoothly paced tension around a small group of characters."--Seattle Review of Books "A real contender for the title of nation's top crime writer."--Daily Mirror (UK) "Rush of Blood appears to warn against making friends on holiday and the further, equally grave, danger of failing to leave them behind when you board the plane home . . . The suspense is expertly built and the resolution of the mystery is unexpected and deeply chilling, the perfect ending to an extremely gripping book."-- Daily Express (UK) "Trouble in paradise follows three British couples back home [in Rush of Blood] . . . Billingham . . . provides a stand-alone that's both creepy and shocking as he probes a friendship with complexities even the friends can't fathom."--Kirkus Reviews "Dialogue is perfectly pitched . . . It is a credit to Billingham's skill as a writer that his characters reveal so much to the reader when blethering around the dinner table while revealing so little to one another . . . All six 'friends' tell small lies to the police, all have their sadnesses and their secrets. Almost any one of them seems capable of murder and any reader trying to guess the culprit's identity will be doing so to the very end."--Scotsman (UK) "Billingham's characters are cleverly drawn and totally believable . . . Rush of Blood is a book not to be missed."--Reviewing the Evidence "This high-tension, fast-paced, character-driven story is masterfully plotted and flawlessly told."--Crime Thriller Girl (UK) "Another well-crafted, suspenseful thriller from Billingham, with a chilling reveal."--Killing Time Crime (UK)

Mark Billingham has twice won the Theakstons Old Peculier Award for Best Crime Novel, received the Sherlock Award for "Best Detective Created by a British Author," and been nominated for seven CWA Daggers. He lives in London.