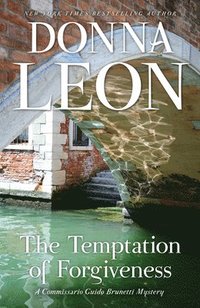 The Temptation of Forgiveness

av Donna Leon
Inbunden Engelska, 2018-04-05
239
Köp
Spara som favorit
Skickas inom 7-10 vardagar.
Gratis frakt inom Sverige över 159 kr för privatpersoner.
Finns även som
Visa alla 4 format & utgåvor
In the twenty-seventh novel in Donna Leon's bestselling mystery series, a suspicious accident leads Commissario Guido Brunetti to uncover a longstanding scam with disturbing unintended consequences The memorable characters and Venetian drama that have long captivated Donna Leon's many readers are on full display in The Temptation of Forgiveness. Surprised, if not dismayed, to discover from his superior, Vice-Questore Patta, that leaks are emanating from the Questura, Commissario Guido Brunetti is surprised more consequentially by the appearance of a friend of his wife's, fearful that her son is using drugs and hopeful Brunetti can somehow intervene. When Tullio Gasparini, the woman's husband, is found unconscious and with a serious brain injury at the foot of a bridge in Venice after midnight, Brunetti is drawn to pursue a possible connection to the boy's behavior. But the truth, as Brunetti has experienced so often, is not straightforward. As the twenty-seventh novel unfolds in Donna Leon's exquisite chronicle of Venetian life in all its blissful and sordid aspects, Brunetti pursues several false and contradictory leads while growing ever more impressed by the intuition of his fellow Commissario, Claudia Griffoni, and by the endless resourcefulness and craftiness of Signorina Elettra, Patta's secretary and gate-keeper. Exasperated by the petty bureaucracy that constantly bedevils him and threatens to expose Signorina Elettra, Brunetti is steadied by the embrace of his own family and by his passion for the classics. This predilection leads him to read Sophocles' Antigone, and, in its light, consider the terrible consequences to which the actions of a tender heart can lead.
Visa hela texten

Praise for The Temptation of Forgiveness Named a Best Crime Book of the Year by Marilyn Stasio for the New York Times Book Review A New York Times Book Review Editors' Choice Named a Financial Times Summer Book Pick Named a Most Anticipated Mystery of 2018 by Deadly Pleasures Mystery Magazine "The Venetian settings are enchanting and Commissario Guido Brunetti's investigative methods are drolly amusing. But it's the living, bleeding humanity of the characters that makes Donna Leon's police procedurals so engaging . . . In his sensitive dealings with the victims of crime, Brunetti proves as much a psychologist and social worker as a cop . . . Tagging along after this sleuth is a wonderful way to see Venice like a native."--Marilyn Stasio, New York Times Book Review "[A] droll and intelligent series . . . As Brunetti makes his tactful way through a Venetian maze of office politics, family connections and moral conundrums, his focus switches from school children procuring narcotics to old people victimized by greedy and unethical medical professionals."--Tom Nolan, Wall Street Journal "[Commissario Guido Brunetti] is the perfect hero for Leon's minimal, almost lyrical writing style . . . As usual in Leon's novels, the frank depiction of the darker aspects of life in modern Venice sits right alongside some of the most enchanting descriptions of the city in contemporary fiction."--Steve Donoghue, Christian Science Monitor "Once again we're in Donna Leon's enticing, troubled and beautiful Venice with its bridges, canals, narrow lanes, tourists, fogs, pastries, wines--and crooks . . . Craftily, meticulously and ingeniously, Leon unfurls her plot . . . Leon's prose is smooth and supple, and her latest mystery is one of her best."--Providence Journal "The Temptation of Forgiveness . . . presents the understated yet razor-sharp investigator with what is possibly his most complex mystery to date, arising from what appears to be a somewhat simple crime that has a particularly tragic result . . . Once again, Leon gives us that rare novel that will satisfy fans of pure mysteries while entrancing those who are interested in personalities, cultures, and the complexities of life and living. Do not miss The Temptation of Forgiveness or, for that matter, any of the books that have come before."--Book Reporter "Perfect beach fare . . . These Venice-based novels are sumptuous: charming, clever, atmospheric and compelling. Leon blends politics, philosophy, history and gastronomy into her mix, and ties it up with a mystery solved by the lugubrious and companionable Brunetti. Wonderful."--Financial Times "As in all the Commissario Brunetti novels, Venice, brooding over the human comedy, Venice watchful of the sea is always a main character . . . Leon's mysteries are always welcome companions because they offer the intellect, as well as the heart, the food they crave."--Reviewing the Evidence "Donna Leon has written almost three dozen novels in this series, combining vivid descriptions of Venice, Brunetti's appetite, and a wide variety of social ills. In this installment, she combines the taking advantage of elderly people and of government programs such as medicine and drug insurance, exposing both while Brunetti goes about in his calm manner conducting his investigation."--Promoting Crime Fiction "After more than twenty-five books in the series, this breaks some new ground . . . It is good to see such an established author changing and growing . . . Not only is the solution both surprising and believable, but it requires Brunetti to make a moral decision."--Deadly Pleasures Mystery Magazine "Dip into any of [Leon's] 27 novels and you'll find delightful places and faces and real cafes, restaurants and piazzas far from the mobs of San Marco. Whether it's the charm of La Serenissima herself or Leon's ability to turn Italy's wild-west

Donna Leon is the author of the highly acclaimed, internationally bestselling Commissario Guido Brunetti mystery series. The winner of the CWA Macallan Silver Dagger for Fiction, among other awards, Donna Leon lived in Venice for many years and now divides her time between Venice and Switzerland.