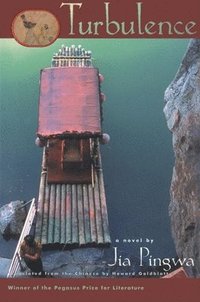 av Jia Pingwa
Häftad Engelska, 2003-01-01
179
Köp
Spara som favorit
Skickas inom 10-15 vardagar.
Fri frakt inom Sverige för privatpersoner.
Kan levereras innan jul!
In this dazzling, earthy novel -- winner of the prestigious Pegasus Prize for Literature -- Jia Pingwa presents an unforgettable chronicle of rural China, a world at once utterly alien and uncannily familiar. Called "impressive and revealing" (Kirkus Reviews), Turbulence follows the lives of two peasants, Golden Dog and Water Girl, through the post-Mao years and sets their star-crossed love for each other against the political upheavals of China itself. Pitted against the bureaucracy that hamstrings modern China, Golden Dog is an idealistic reporter not afraid to lash out at the abuses and corruption of the rival Tian and Gong clans. As he winds through a fascinating cast of revolutionary cadres, bureaucrats, fortune-tellers, blacksmiths, farmers, and artisans, Golden Dog, however, suffers a series of setbacks. Despite his love for the saintly Water Girl, the two seem destined to be kept apart by the vicissitudes of politics and culture -- she twice widowed and he pressured into an engagement with the seductive Yingying and, racked by guilt, turning at times to the lovely Shi Hua for solace. Part epic story, part love story, part political parable, Turbulence places the reader in a world where the I Ching exists alongside The Thoughts of Chairman Mao. Yet the sheer humanity of the novel transcends both cultural and political differences and makes it stunningly resonant to our own culture. "A rare, richly detailed, and insightful account of life in a Chinese village ... With earthy language and bawdy humor." -- Ann Scott Tyson, The Christian Science Monitor
Visa hela texten