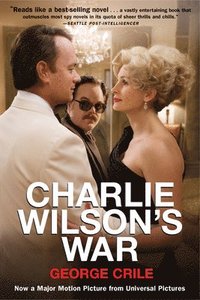 av George Crile
Häftad Engelska, 2004-04-01
229
Köp
Spara som favorit
Finns även som
Visa alla 1 format & utgåvor
Charlie Wilson's War was a publishing sensation and a New York Times, Washington Post, and Los Angeles Times bestseller. In the early 1980s, a Houston socialite turned the attention of maverick Texas congressman Charlie Wilson to the ragged band of Afghan "freedom fighters" who continued, despite overwhelming odds, to fight the Soviet invaders. Wilson, who sat on the all-powerful House Appropriations Committee, managed to procure hundreds of millions of dollars to support the mujahideen. The arms were secretly procured and distributed with the help of an out-of-favor CIA operative, Gust Avrokotos, whose working-class Greek-American background made him an anomaly among the Ivy League world of American spies. Avrakotos handpicked a staff of CIA outcasts to run his operation and, with their help, continually stretched the Agency's rules to the breaking point. Moving from the back rooms of the Capitol, to secret chambers at Langley, to arms-dealers' conventions, to the Khyber Pass, this book presents an astonishing chapter of our recent past, and the key to understanding what helped trigger the sudden collapse of the Soviet Union and ultimately led to the emergence of a brand-new foe in the form of radical Islam.
Visa hela texten

"A vivid narrative. . . . Charlie Wilson's War is a behind-the-scenes chronicle of a program that is still largely classified. . . . In its time there was little dispute that the covert war was one of the most successful C.I.A. operations ever undertaken. . . . Few people who remember Wilson's years in Washington would discount even the wildest tales." --David Johnston, The New York Times Book Review "Irresistible. . . . [A] thoroughly reported, painstakingly detailed and calmly written account. . . . The story of this odd and world-shaping partnership really can't be believed until Crile and his thorough reporting gradually make it clear that yes, it all really happened. Crile also sketches a variety of other figures in this drama with an eye for what makes them strange and interesting." --Steve Kettman, The San Francisco Chronicle "Charlie Wilson's War is one of the most important books ever written about U.S. government covert operations. . . . [It's] such a sprawling tale that describing it adequately in a brief review is daunting." --Steve Weinberg, The Seattle Times "Vibrant storytelling. . . . Crile reveals in extraordinary detail the over-the-top, under-the-table machinations of Wilson, one of Capitol hill's ablest political bulldozers, as he spearheaded what eventually became known as the Soviets' Vietnam. . . . [Charlie Wilson's War] offer[s] an entirely new take on Reagan-era history with international sweep and modern implications, neatly laid over the intriguing, untold inner workings of [the CIA]." --Jan Jordan, The Houston Chronicle "[A] glowing account. . . . Crile is . . . an exhuberant Tom Clancy-type enthusiast for the Afghan caper. . . . Criles account is important, if appalling, precisely because it details how a ruthless ignoramus congressman and a high-ranking CIA thug managed to hijack American foreign policy." --Chalmers Johnson, The Los Angeles Times Book Review "Charlie Wilson's War reads like a best-selling novel. . . . Crile's globe-trotting research and adroit writing have produced a vastly entertaining book that outmuscles most spy novels in its quota of sheer thrills and chills." --John Marshall, The Seattle Post-Intelligencer "Crile's real accomplishment is in telling the human story of Rep. Charlie Wilson of Texas and a now-retired covert CIA operative named Gust Avrakotos. . . . [Crile] has unearthed some startling details about this chapter of our covert history, found and written about two colorful if flawed characters, and lent a great deal to a better understanding of our recent past and our troubled present." --Edward P. Smith, The Denver Post "A cross between Tom Clancy and Carl Hiassen, with the distinguishing feature that it's all apparently true. . . . Throw in a middle-aged Texan belly dancer, an assortment of Congressional looinies, a few beauty queens, some ruthless Afghan rebels, and a murderous Pakistani dictator who only wants to be understood." --Gerard DeGroot, Christian Science Monitor "Charlie Wilson's War conveys the sense of victory CIA leaders felt over the 'success' in Afghanistan. . . . Wilson himself is a writer's dream of a main character. . . . A rollicking good tale." --Karen Sandstrom, The Cleveland Plain Dealer "In the midst of Crile's important expose of U.S. covert policy in Afghanistan and it's ramifications, there's an engrossing character study as well." --Clay Smith, The Austin Chronicle "A classic story of good intentions gone wrong, a comedy of can-do Americans loose in a world it really doesn't understand." --Charles Taylor, Salon.com "His narrative is fast-moving, supercharged, and overheated, chock-full of high drama and sexual innuendo. In short, it is great fun." --Raymond Puffer, KLIATT "The subtitle here--The Extraordinary Story of How the Wildest Man in Congress and a Rogue CIA Agent Changed the History