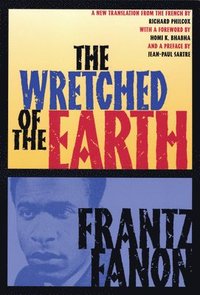 The Wretched of the Earth

av Frantz Fanon
Häftad Engelska, 2005-03-01
169
Köp
Spara som favorit
Skickas inom 5-8 vardagar.
Fri frakt inom Sverige för privatpersoner.
A distinguished psychiatrist from Martinique who took part in the Algerian Nationalist Movement, Frantz Fanon was one of the most important theorists of revolutionary struggle, colonialism, and racial difference in history. Fanon s masterwork is a classic alongside Edward Said s Orientalism or The Autobiography of Malcolm X, and it is now available in a new translation that updates its language for a new generation of readers. The Wretched of the Earth is a brilliant analysis of the psychology of the colonized and their path to liberation. Bearing singular insight into the rage and frustration of colonized peoples, and the role of violence in effecting historical change, the book incisively attacks the twin perils of postindependence colonial politics: the disenfranchisement of the masses by the elites on the one hand, and intertribal and interfaith animosities on the other. Fanon s analysis, a veritable handbook of social reorganization for leaders of emerging nations, has been reflected all too clearly in the corruption and violence that has plagued present-day Africa. The Wretched of the Earth has had a major impact on civil rights, anticolonialism, and black consciousness movements around the world, and this bold new translation by Richard Philcox reaffirms it as a landmark."
Visa hela texten

"The writing of Malcolm X or Eldridge Cleaver or Amiri Baraka or the Black Panther leaders reveals how profoundly they have been moved by the thoughts of Frantz Fanon. --The Boston Globe "Have the courage to read this book."--Jean-Paul Sartre "This century's most compelling theorist of racism and colonialism." -Angela Davis "The value of The Wretched of the Earth [lies] in its relation to direct experience, in the perspective of the Algerian revolution. . . . Fanon forces his readers to see the Algerian revolution--and by analogy other contemporary revolutions--from the viewpoint of the rebels."--Conor Cruise O'Brien, Nation "The Wretched of the Earth is an explosion."--Emile Capouya, Saturday Review "This is not so much a book as a rock thrown through the window of the West. It is the Communist Manifesto or the Mein Kampf of the anticolonial revolution, and as such it is highly important for any Western reader who wants to understand the emotional force behind that revolution."--Time