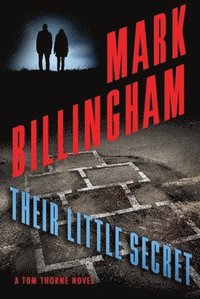 av Mark Billingham
Inbunden Engelska, 2019-06-04
239
Köp
Spara som favorit
Skickas inom 5-8 vardagar.
Fri frakt inom Sverige för privatpersoner.
Finns även som
Visa alla 1 format & utgåvor
When DI Tom Thorne is called to conduct a routine assessment at the site of a suicide, he expects to be in and out in no time. But when he arrives at the metro station, where a woman named Philippa Goodwin threw herself in front of an underground train, Thorne inexplicably senses something awry and feels compelled to dig deeper. He soon discovers that she was the victim of a callous con-man who preys on vulnerable women, and whose deception plunged Philippa to her end. Thorne enlists DI Nicola Tanner to help him track down the swindler and bring him to justice. But the detective duo gets more than they bargained for when a young man's bludgeoned body turns up on the shore of a nearby seaside town. The two cases come together in a way that neither of the detectives could have foreseen. Brilliantly plotted with a shocking psychological bent, Their Little Secret is another masterful thriller from one of Britain's most beloved crime writers. With twists and turns that will keep readers guessing until the final page, this is Mark Billingham's most chilling novel yet.
Visa hela texten

Praise for Their Little Secret "This is a fantastic thriller, combining a gripping plot and lead characters of remarkable depth. Billingham is a multiple-award winner, and his books have sold more than six million copies. Readers who grab this one but aren't familiar with its predecessors will be seeking them out. A series to savor." --Booklist (starred review) "Billingham's outstanding 16th procedural featuring Det. Insp. Tom Thorne (after 2018's The Killing Habit) finds Thorne on duty with a team responsible for assessing whether sudden deaths are suspicious when Philippa Goodwin jumps in front of a train in the London Underground... The twisted plot unfolds gradually, with a maximum of suspense. Billingham never strains credulity in this thoughtful page-turner." --Publishers Weekly (starred review) "Mark Billingham's Detective Inspector Tom Thorne is akin to Ian Rankin's John Rebis and Jo Nesbo's Harry Hole: a deeply flawed character with a plethora of personal and professional problems, but a damned fine investigator in his own way...With lots of surprises and some very crisp, staccato storytelling, it's impossible to put down Their Little Secret." --BookPage "Billingham does an exquisite job of keeping readers guessing...If you aren't familiar with the author or his protagonist, or if you have been away from the series for a bit, Their Little Secret is a terrific place to jump on the Billingham bandwagon." --Bookreporter Praise for The Killing Habit: "Another compulsively readable blend of satire, crime fiction motifs, and the occasional quirky, violent interlude in a tale that will satisfy [Billingham's] current fans and attract new ones."--Booklist "As ever with Billingham, a rich cast of characters and tense situations are marshalled with panache, leading to a final terrifying encounter."--Barry Forshaw, Financial Times "[The Killing Habit] shows why Billingham stands at the forefront of British crime authors." --Publishers Weekly "Mark Billingham has provided us with yet another temptation for a one-sit reading...If you're not already on board Billingham's (almost) annual visit to Thorne's world, you should jump on now." --Bookreporter "This is the 15th novel featuring Thorne, and neither he nor Billingham show signs of fatigue. One of the great series of British crime fiction continues."--Times (London) Praise for Mark Billingham and the Tom Thorne series: "Morse, Rebus, and now Thorne. The next superstar detective is already with us--don't miss him."--Lee Child "Billingham is a world-class writer and Tom Thorne is a wonderful creation. Rush to read these books."--Karin Slaughter "With each of his books, Mark Billingham gets better and better. These are stories and characters you don't want to leave."--Michael Connelly "Mark Billingham has brought a rare and welcome blend of humanity, dimension, and excitement to the genre."--George Pelecanos

Mark Billingham has twice won the Theakston Old Peculier Award for Best Crime Novel and also won the Sherlock Award for "Best Detective Created by a British Author." His books, which include the critically acclaimed Tom Thorne series, have been translated into twenty-five languages and have sold over six million copies. He lives in London.