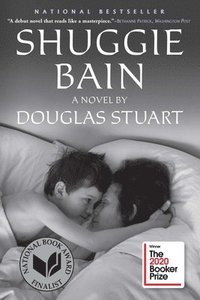 av Douglas Stuart
Häftad Engelska, 2020-10-13
187
Köp
Spara som favorit
Finns även som
Visa alla 1 format & utgåvor
SHORTLISTED FOR THE BOOKER PRIZE FINALIST FOR THE NATIONAL BOOK AWARDShuggie Bain is the unforgettable story of young Hugh "Shuggie" Bain, a sweet and lonely boy who spends his 1980s childhood in run-down public housing in Glasgow, Scotland. Thatcher's policies have put husbands and sons out of work, and the city's notorious drugs epidemic is waiting in the wings. Shuggie's mother Agnes walks a wayward path: she is Shuggie's guiding light but a burden for him and his siblings. She dreams of a house with its own front door while she flicks through the pages of the Freemans catalogue, ordering a little happiness on credit, anything to brighten up her grey life. Married to a philandering taxi-driver husband, Agnes keeps her pride by looking good--her beehive, make-up, and pearly-white false teeth offer a glamorous image of a Glaswegian Elizabeth Taylor. But under the surface, Agnes finds increasing solace in drink, and she drains away the lion's share of each week's benefits--all the family has to live on--on cans of extra-strong lager hidden in handbags and poured into tea mugs. Agnes's older children find their own ways to get a safe distance from their mother, abandoning Shuggie to care for her as she swings between alcoholic binges and sobriety. Shuggie is meanwhile struggling to somehow become the normal boy he desperately longs to be, but everyone has realized that he is "no right," a boy with a secret that all but him can see. Agnes is supportive of her son, but her addiction has the power to eclipse everyone close to her--even her beloved Shuggie. A heartbreaking story of addiction, sexuality, and love, Shuggie Bain is an epic portrayal of a working-class family that is rarely seen in fiction. Recalling the work of Edouard Louis, Alan Hollinghurst, Frank McCourt, and Hanya Yanagihara, it is a blistering debut by a brilliant novelist who has a powerful and important story to tell.
Visa hela texten

Praise for Shuggie Bain Shortlisted for the Booker Prize Finalist for the National Book Award Finalist for the Kirkus Prize Shortlisted for the Center for Fiction First Novel Prize Shortlisted for the Books Are My Bag Breakthrough Author Award Named One of the Best Books of the Year So Far by Elle Named a Best Book to Read This Winter by Vogue "We were bowled over by this first novel, which creates an amazingly intimate, compassionate, gripping portrait of addiction, courage and love. The book gives a vivid glimpse of a marginalized, impoverished community in a bygone era of British history. It's a desperately sad, almost-hopeful examination of family and the destructive powers of desire."--Booker Prize Judges "The body--especially the body in pain--blazes on the pages of Shuggie Bain . . . This is the world of Shuggie Bain, a little boy growing up in Glasgow in the 1980s. And this is the world of Agnes Bain, his glamorous, calamitous mother, drinking herself ever so slowly to death. The wonder is how crazily, improbably alive it all is . . . The book would be just about unbearable were it not for the author's astonishing capacity for love. He's lovely, Douglas Stuart, fierce and loving and lovely. He shows us lots of monstrous behavior, but not a single monster--only damage. If he has a sharp eye for brokenness, he is even keener on the inextinguishable flicker of love that remains . . . The book leaves us gutted and marveling: Life may be short, but it takes forever."--Leah Hager Cohen, New York Times Book Review "A debut novel that reads like a masterpiece."--Bethanne Patrick, Washington Post "Agnes Bain [is] the unforgettable human train wreck at the center of Douglas Stuart's novel Shuggie Bain . . . Titling the novel after Shuggie rather than the woman who dominates him seems like a small gesture of defiance on Mr. Stuart's part . . . Mr. Stuart vividly inhabits the city's singular 'Weegie' dialect and vocabulary . . . It's the obstinate Bain pride that prevents this novel from becoming a wallow in victimhood and gives it its ruined dignity."--Sam Sacks, Wall Street Journal "The tough portraits of Glaswegian working-class life from William McIlvanney, James Kelman, Alasdair Gray, and Agnes Owens can be felt in Shuggie Bain without either overshadowing or unbalancing the novel . . . Stuart's capacity for allowing wild contradictions to convincingly coexist is also on display in the individual vignettes that comprise the novel, blending the tragic with the funny, the unsparing with the tender, the compassionate with the excruciating. He can even pull off all of them in a single sentence . . . This overwhelmingly vivid novel is not just an accomplished debut. It also feels like a moving act of filial reverence."--James Walton, New York Review of Books "Rarely does a debut novel establish its world with such sure-footedness, and Stuart's prose is lithe, lyrical, and full of revelatory descriptive insights . . . Reading Shuggie Bain entails a kind of archaeology, sifting through the rubble of the lives presented to find gems of consolation, brief sublime moments when the characters slip the bonds of their hardscrabble existence. That the book is never dismal or maudlin, notwithstanding its subject matter, is down to the buoyant life of its two principal characters, the heart and humanity with which they are described. Douglas Stuart has written a first novel of rare and lasting beauty."--Alex Preston, Guardian "Douglas Stuart drags us through the 1980s childhood of 'a soft boy in a hard world' in a series of vivid, effective scenes . . . Shuggie Bain is a novel that aims for the heart and finds it. As a novel it's good, as a debut very good, and I wouldn't be surprised to see it progress from Booker longlist to shortlist."--John Self, Times (UK) "Not only does [Stuart] clearly know his characters, he clearly loves them . . . Stuart describes th

Douglas Stuart was born and raised in Glasgow. After graduating from the Royal College of Art in London, he moved to New York City, where he began a career in fashion design. Shuggie Bain is his first novel. His writing has appeared in the New Yorker and Literary Hub.