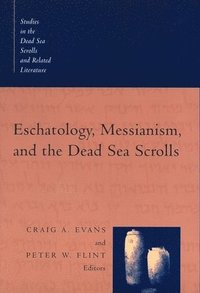 av Craig Evans, Craig A Evans, Peter W Flint
Häftad Engelska, 1997-09-01
169
Köp
Spara som favorit
Skickas inom 5-8 vardagar.
Fri frakt inom Sverige för privatpersoner.
The New Testament is of prime importance for understanding early Jewish and Christian messianism and eschatology. Yet often the New Testament presumes a background and context of belief without fully articulating it. Early Jewish and Christian messianism and eschatology, after all, did not emerge in a vacuum; they developed out of early Jewish hopes that had their roots in the Old Testament. A knowledge of early Jewish literature, and especially of the Dead Sea Scrolls from Qumran, is essential for understanding the shape of these ideas at the turn of the era. In this book, the inaugural volume in the Studies in the Dead Sea Scrolls and Related Literature series, Craig Evans and Peter Flint have assembled eight essays from outstanding scholars who address this issue from a variety of angles. After an introduction by the editors, successive essays deal with the Old Testament foundations of messianism; the figure of Daniel at Qumran; the Teacher of Righteousness; the expectation of the end in the Scrolls; and Jesus, Paul, and John seen in light of Qumran.
Visa hela texten