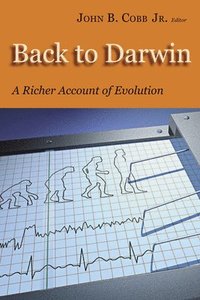 Keith Ward -- University of Oxford -An original and invaluable contribution to the debate on evolution and design, balancing process insights with state-of-the-art scientific contributions.-Niels Henrik Gregersen -- University of Copenhagen -This is both a primer in current philosophy of evolutionary biology and a new proposal for integrating evolution and religious thinking. Cobb and company listen to the best representatives of neo-Darwinism and analyze the rich tapestry of supplementary theories before they argue for the creative role of biological agency in evolution. A genuinely exciting volume!-Christian Century -Offers a solid introduction to both modern evolutionary thought and process theology. . . . Back to Darwin has begun a worthwhile and important project that should be continued and expanded.- Perspectives on Science & Christian Faith -Back to Darwin is recommended.- Reports of the National Center for Science Education -This volume will be of interest to anyone concerned to explore alternatives to the science-religion debate. . . . [It] deserves a wide readership.-

Bloggat om Back to Darwin