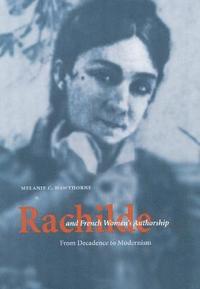 From Decadence to Modernism

av Melanie C Hawthorne
Inbunden Engelska, 2001-09-01
549
Köp
Spara som favorit
Kan levereras innan julafton!
Finns även som
Visa alla 1 format & utgåvor
Under the assumed name Rachilde, Marguerite Eymery (1860-1953) wrote over sixty works of fiction, drama, poetry, memoir, and criticism, including Monsieur Venus, one of the most famous examples of decadent fiction. She was closely associated with the literary journal Mercure de France, inspired parts of Oscar Wilde's The Picture of Dorian Gray, and mingled with all the literary lights of the day. Yet for all that, very little has been written about her. Melanie C. Hawthorne corrects this oversight and counters the traditional approach to Rachilde by persuasively portraying this "eccentric" as patently representative of the French women writers of her time and of the social and literary issues they faced. Seen in this light, Rachilde's writing clearly illustrates important questions in feminist literary theory as well as significant features of turn-of-the-century French society. Hawthorne arranges her approach to Rachilde around several defining events in the author's life, including the controversial publication of Monsieur Venus, with its presentation of sex reversals. Weaving back and forth in time, she is able to depict these moments in relation to Rachilde's life, work, and times and to illuminate nineteenth-century publishing practices and rivalries, including authorial manipulations of the market for sexually suggestive literature. The most complete and accurate account yet written of this emblematic author, Hawthorne's work is also the first to situate Rachilde in the broader social contexts and literary currents of her time and of our own.
Visa hela texten

"A well-written, well-edited contribution to the study of women writers and cultural history."-Choice * Choice * "Hawthorne's biography is one of the most sophisticated examples of bigraphical writing, persuasively and sympathetically tracing the gender crisis running through the nineteenth and twentieth centuries."-Dawn Marlan, Modernism/Modernity -- Dawn Marlan * Modernism/Modernity *

Melanie C. Hawthorne is an associate professor of Modern Languages at Texas A&M University, College Station. Her publications include Contingent Loves: Simone de Beauvoir and Sexuality and a translation of Rachilde's The Juggler.

Contents: List of Illustrations Acknowledgments List of Abbreviations for Works by Rachilde Introduction On Writing Biography: In which the author pays a visit to Perigueux and makes a detour to Galveston 1860, February 11 Women as Outsiders: In which Marguerite Eymery (Rachilde) is born, a werewolf appears, and traps are both set and sprung 1870, October 29 The Ambivalence of the Paternal: In which Captain Eymery is taken prisoner 1875, January or Early February The Cultural Injunction to Silence: In which Rachilde is engaged, appears to attempt suicide, and meets a ghost who delivers an important message 1876, March 1 Woman as Medium: In which seances are held, Madame Eymery meets "Rachilde," and doubles mysteriously appear 1877, June 23 Authority, Authorship, and Authorization: In which Rachilde publishes her first story and Victor Hugo authorizes her 1884, May-July The Politics of Publishing: In which Monsieur Venus is published and the French police take an interest in Rachilde 1884, December 12 Writing as Cross-Dressing: In which Rachilde applies for permission to cross-dress and become a writer 1885, A Thursday in March Marriage and the Woman Writer: In which Rachilde meets Alfred Vallette and marries him, despite some second thoughts 1887, February 26 (A Saturday) The Photograph Never Lies: In which a front page brings attention to Rachilde's hair 1889, October 25 The Cultural Legitimacy of the Woman Writer: In which Rachilde's daughter is born and questions are raised about legitimacy 1890, November 10 Imagining the Self: In which Rachilde's first play is performed and some mirrors are looked into 1894, A Tuesday Male Anxiety at the Fin de Siecle: In which Rachilde, cupbearer to the symbolist gods, meets Alfred Jarry 1900, December 10 Women and Education: In which Rachilde's mother is admitted to the asylum of Charenton and some deficiencies in Rachilde's education become apparent 1925, July 2 Women and Surrealism: In which Rachilde gets into a bun fight 1928, June Gender Anxiety in French Modernism: In which Le Prisonnier is published and Rachilde acts rather queerly 1953, April 4 On Minding: In which Rachilde is reunited with Lison Notes Bibliography Index