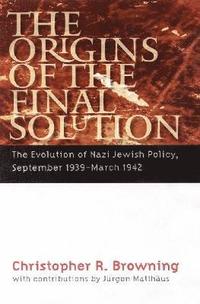 The Origins of the Final Solution

av Christopher R Browning
Häftad Engelska, 2007-05-01
439
Köp
Spara som favorit
Fåtal ex i lager. Skickas inom 1-2 vardagar.
Fri frakt inom Sverige för privatpersoner.
Finns även som
Visa alla 1 format & utgåvor
Published by the University of Nebraska Press, Lincoln, and Yad Vashem, Jerusalem In 1939, the Nazi regime's plans for redrawing the demographic map of Eastern Europe entailed the expulsion of millions of Jews. By the fall of 1941, these plans had shifted from expulsion to systematic and total mass murder of all Jews within the Nazi grasp. The Origins of the Final Solution is the most detailed and comprehensive analysis ever written of what took place during this crucial period-of how, precisely, the Nazis' racial policies evolved from persecution and "ethnic cleansing" to the Final Solution of the Holocaust. Focusing on the months between the German conquest of Poland in September 1939-which brought nearly two million additional Jews under Nazi control-and the beginning of the deportation of Jews to the death camps in the spring of 1942, Christopher R. Browning describes how Poland became a laboratory for experiments in racial policies, from expulsion and decimation to ghettoization and exploitation under local occupation authorities. He reveals how the subsequent attack on the Soviet Union opened the door for an immense radicalization of Nazi Jewish policy-and marked the beginning of the Final Solution. Meticulously documenting the process that led to this fatal development, Browning shows that Adolf Hitler was the key decision-maker throughout, approving major escalations in Nazi persecution of the Jews at victory-induced moments of euphoria. Thoroughly researched and lucidly written, this groundbreaking work provides an essential chapter in the history of the Holocaust.
Visa hela texten

"An internationally renowned historian of the Holocaust, Browning explains the evolution of Nazi anti-Jewish policies from discrimination and expulsions to outright systematic murder. . . . Based on a superb mastery of the archival sources and the secondary literature, Browning leads his readers through the step-by-step radicalization of Nazi policies in the critical months after the outbreak of WWII. . . . Even though Hitler rarely issued explicit orders, Browning shows he was intimately involved each step of the way. . . . This book is sure to become the standard work on the emergence of the Holocaust."-Publishers Weekly starred review * Publishers Weekly * "The more Nazi leaders talked of radical solutions, fundamental solutions, total solutions, eradication, total liquidation and final solutions, the more obvious it became what finality would consist of. Browning takes us there, step by step, false lead by false lead, with never-failing intellectual mastery. It is difficult to see this work being superseded in the foreseeable future."-Times Literary Supplement * Times Literary Supplement * "Extraordinary. . . . Browning has obviously mastered every pertinent document available-from archives in Germany, the United States, the former Soviet Union, and Israel-and assimilated them all into his sometimes day-by-day account of the development of Nazi policy. In sifting the evidence he makes clear what's known and what's not, what's probable, what's possible, and what's unlikely; with rigor and unusually incisive writing style he places events, decisions, and debates in a precise historical context. . . . And above all, with exactitude he lays bare his own suppositions as he transparently builds his arguments and his narrative. A masterpiece of the historian's art."-Benjamin Schwarz, Atlantic Monthly -- Benjamin Schwarz * Atlantic Monthly * "Superb. . . .[Browning] has created an eloquent, painstaking narrative of how the Final Solution evolved until it 'could evolve no further in concept. It remained only to be implemented through action.'"-Joshua Rubenstein, Wall Street Journal -- Joshua Rubenstein * Wall Street Journal * "This magisterial work does offer us something new-an unrivaled account of how the Nazi leadership ended up with a policy of industrialized mass murder of Jews as it fought a war of territorial expansion against the threats supposedly posed by Polish nationalism and Soviet Bolshevism. Probably no one is better qualified for this task than Christopher R. Browning. . . . In this summation of more than 20 years of research, he explains how the grand design emerged. . . and points the way to a reintegration of the whole subject in a much broader history of nationalist conflict, forced population movements and colonial settlement."-Mark Mazower, New York Times Book Review -- Mark Mazower * New York Times Book Review * "The definitive work on the road Germany took toward the Final Solution during the crucial first three years of the war."- Istvan Deak, New York Review of Books -- Istvan Deak * New York Review of Books *

Christopher R. Browning is Frank Porter Graham Professor of History at the University of North Carolina-Chapel Hill. He is the author of numerous books on Nazism and the Holocaust, including Nazi Policy, Jewish Workers, German Killers and Ordinary Men: Reserve Police Battalion 101 and the Final Solution in Poland.