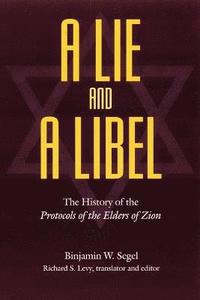 A Lie and a Libel

The History of the Protocols of the Elders of Zion

av Binjamin W Segel, Richard S Levy
Häftad Engelska, 1995-06-01
139
Köp
Spara som favorit
Skickas inom 5-8 vardagar.
Fri frakt inom Sverige för privatpersoner.
Finns även som
Visa alla 1 format & utgåvor
A strange and repugnant mystery of the twentieth century is the durability of the Protocols of the Elders of Zion, a clumsy forgery purporting to be evidence of the supposed Jewish plot to rule the world. Though it has been exposed as a forgery, some apprentice brownshirt is always rediscovering it, the latest in a line of gullibility that includes, most famously, Henry Ford. Recently it has been translated into Japanese and circulates once again with renewed virulence in the former Soviet Union and Eastern Europe. In 1924 in Germany the Jewish author and journalist Binjamin Segel wrote a major historical expose of the fraud and later edited his work into a shorter form, published as Welt-Krieg, Welt-Revolution, Welf-Verschwoerung, Welt-Oberregierung (Berlin 1926). Translator Richard S. Levy, a specialist on the history of anti-semitism, provides an extensive introduction on the circumstances of Segel's work and the story of the Protocols up to the 1990s, including an explanation of its continuing psychological appeal and political function.
Visa hela texten

"The Protocols of the Elders of Zion, a potent forgery alleging a Jewish plot to run the world, has proved durable since its turn-of-the-century fabrication by Russian police; this book offers welcome background, context and refutation. The main section is the 1926 effort by Segel, a German Jewish journalist, to expose the fraud; he shows how the infamous text was plagiarized from trash fiction, Machiavelli's speeches and a political satire. . . . Levy adds much in his comprehensive introduction. Unlike most anti-Semitic works, he notes, this has no national context or identity. Thus it has served multiple purposes for different audiences; it was not only publicized by the Nazis, but it also remains influential in the Arab world and eastern Europe and among American right-wingers and black nationalists."-Publishers Weekly * Publishers Weekly *

Bloggat om A Lie and a Libel

Richard S. Levy is an associate professor of history at the University of Illinois-Chicago. He is the editor of Antisemitism in the Modern World: An Anthology of Texts.