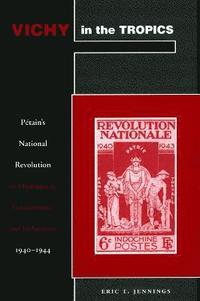 Vichy in the Tropics

av Eric T Jennings
Inbunden Engelska, 2002-01-01
1189
Köp
Spara som favorit
Skickas inom 3-6 vardagar.
Fri frakt inom Sverige för privatpersoner.
Finns även som
Visa alla 1 format & utgåvor
This book examines the role of the Vichy regime in bringing about profound changes in the French colonial empire after World War II. In the war's aftermath, the French colonial system began to break down. Indochina erupted into war in 1945 and Madagascar in 1947, while Guadeloupe chose an opposite course, becoming territorially part of France in 1946. The book traces the introduction of an integralist ideology of "National Revolution" to the French colonial realm, shedding new light on the nature of the Vichy regime, on the diversity of French colonialism, and on the beginnings of decolonization. Encompassing three very different regions and cultures, the study reveals both a unity in Vichy's self-reproduction overseas and a diversity of forms which this ideological cloning assumed. World War II is often presented as an agent of change in the French colonial empire only insofar as it engendered a loss of prestige for France as colonizer. The author argues that Marshal Philippe Petain's Vichy regime contributed to decolonization in a much more substantial way, by ushering in an ideology based on a new, harsher brand of colonialism that both directly and indirectly fueled indigenous nationalism.The author also rejects the popular notion that Nazi pressure lurked behind the Vichy government's colonial actions, and that the regime lacked any real agency in colonial affairs. He shows that, far from allowing the Germans to run French colonies from behind the scenes, Vichy leaders vigorously promoted their own undiluted form of ultra-conservative ideology throughout the French empire. They delivered to the colonies an authoritarianism that not only elicited fierce opposition but sowed the seeds of nationalist resurgence among indigenous cultures. Ironically, the regime awoke long-dormant nationalist sentiments by introducing to the empire Petain's cherished themes of authenticity, tradition, folklore, and voelkism.
Visa hela texten

"Jennings's study is a first-rate, original contribution to the scholarship of the French empire. His style is clear and coherent, and his work is not ponderous nor slow. Although aimed at advanced students of both the Vichy period and French expansionism, Vichy in the Tropics is a work that will enlighten anyone with an interest in Europe during World War II." -- <I>History</I> "What Eric Jennings' fine study provides is a look inside Vichy's empire, exploring the ways in which Vichy's ideology played out in three tropical settings." -- <I>H-France Book Reviews</I> "This original, timely, and finely crafted comparative study of French colonial policies and ethnic relations during the second quarter of the twentieth century represents a significant contribution to colonial cultural history." -- <I>Journal of Interdiciplinary History</I> "This excellent book . . . opens up a field that has received scant attention even from French scholars of empire who tend to dismiss it, particularly in terms of its significance for any understanding of French decolonization." -- <I>American Historical Review</I> "This well written, fast moving, and always intriguing book looks at the development of Vichy's colonial policy and how it reflected its leaders' deeply held values. Bringing together much previously unknown material, Jennings reveals the extent to which Vichy policy fostered and triggered nationalism in the French colonies." -- William B. Cohen * Indiana University * "In this interesting an innovative study, Eric Jennings makes an important contribution to the history of Vichy France that is at once original in subject matter, grounded in substantial archival research, and convincing in its key arguments." * Journal of Modern History *

Bloggat om Vichy in the Tropics

Eric T. Jennings is Associate Professor of History at the University of Toronto.