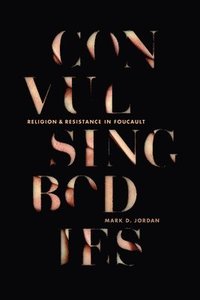 Religion and Resistance in Foucault

av Mark D Jordan
Häftad Engelska, 2014-11-05
300
Köp
Spara som favorit
Finns även som
Visa alla 1 format & utgåvor
By using religion to get at the core concepts of Michel Foucault's thinking, this book offers a strong alternative to the way that the philosopher's work is read across the humanities. Foucault was famously interested in Christianity as both the rival to ancient ethics and the parent of modern discipline and was always alert to the hypocrisy and the violence in churches. Yet many readers have ignored how central religion is to his thought, particularly with regard to human bodies and how they are shaped. The point is not to turn Foucault into some sort of believer or to extract from him a fixed thesis about religion as such. Rather, it is to see how Foucault engages religious rhetoric page after page-even when religion is not his main topic. When readers follow his allusions, they can see why he finds in religion not only an object of critique, but a perennial provocation to think about how speech works on bodies-and how bodies resist. Arguing that Foucault conducts experiments in writing to frustrate academic expectations about history and theory, Mark Jordan gives equal weight to the performative and theatrical aspects of Foucault's writing or lecturing. How does Foucault stage possibilities of self-transformation? How are his books or lectures akin to the rituals and liturgies that he dissects in them? Convulsing Bodies follows its own game of hide-and-seek with the agents of totalizing systems (not least in the academy) and gives us a Foucault who plays with his audiences as he plays for them-or teaches them.
Visa hela texten

"Jordan offers a bold book that warns readers away from common mistakes fans and detractors make in reading Foucault . . . Jordan's careful readings and insightful analyses cover a number of the philosopher's most famous works and several series of public lectures at the College de France . . .Jordan is especially adept at noting writers who had a formative influence on Foucault's thought and at noting nuances of the French language often missed, or misunderstood, by English readers. It is a mark of Jordan's success that readers with a background in Foucault will find themselves thinking differently about thinking differently." -- S. Young * <i>Choice</i> * "Convulsing Bodies should serve as a deft and insightful introduction to the thinker's corpus (pun intended) for graduate students and senior scholars alike." -- Megan Goodwin * <i>Religious Studies Review</i> * "This book is full of insights and it does something that few commentaries on Foucault do: take him seriously as a writer, take him seriously as an examiner of religious forms, take him seriously as occasionally humorous." -- James Bernauer * Boston College * "This will be the best introduction to Foucault and religion that will have been written. It treats Foucault's texts with a sympathetic seriousness that few other religious/theological treatments are able to accomplish. We get to hear about the sacred as if from inside Foucault's own concerns." -- Tom Beaudoin * Fordham University *