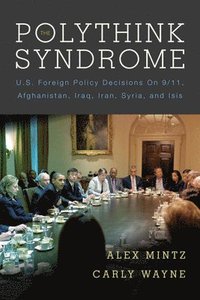 av Alex Mintz, Carly Wayne
Inbunden Engelska, 2016-01-20
329
Köp
Spara som favorit
Skickas inom 5-8 vardagar.
Fri frakt inom Sverige för privatpersoner.
Finns även som
Visa alla 2 format & utgåvor
Why do presidents and their advisors often make sub-optimal decisions on military intervention, escalation, de-escalation, and termination of conflicts? The leading concept of group dynamics, groupthink, offers one explanation: policy-making groups make sub-optimal decisions due to their desire for conformity and uniformity over dissent, leading to a failure to consider other relevant possibilities. But presidential advisory groups are often fragmented and divisive. This book therefore scrutinizes polythink, a group decision-making dynamic whereby different members in a decision-making unit espouse a plurality of opinions and divergent policy prescriptions, resulting in a disjointed decision-making process or even decision paralysis. The book analyzes eleven national security decisions, including the national security policy designed prior to the terrorist attacks of 9/11, the decisions to enter into and withdraw from Afghanistan and Iraq, the 2007 "surge" decision, the crisis over the Iranian nuclear program, the UN Security Council decision on the Syrian Civil War, the faltering Kerry Peace Process in the Middle East, and the U.S. decision on military operations against ISIS. Based on the analysis of these case studies, the authors address implications of the polythink phenomenon, including prescriptions for avoiding and/or overcoming it, and develop strategies and tools for what they call Productive Polythink. The authors also show the applicability of polythink to business, industry, and everyday decisions.
Visa hela texten

"Americans excel in most things, from technology to music. But they keep failing in foreign policy. It is desperately important to understand why. The Polythink Syndrome offers a novel explanation-and possible remedies. This book is a major contribution and it will be influential." -- Edward N. Luttwak, Senior Associate, Center for Strategic and International Studies * Washington DC * "Much attention has been paid to the consequences of groupthink; however, very little has been paid to this other end of the decision making spectrum: polythink. This book elaborates on the antecedent conditions, processes and consequences of polythink in decision making, and concludes with a discussion of the conditions that mitigate it and leverage it for effective decision making. In doing so, it adds an important element to the discourse on decision-making and policy making at all levels." -- Peter T. Coleman, Director * Morton Deutsch International Center for Cooperation and Conflict Resolution at Columbia University * "This book offers impressive evidence in favor of polythink as a major factor impacting foreign policy decision-making. Case material from the wars in Afghanistan and Iraq, along with the Iranian nuclear dispute, is treated in an original and stimulating way. A major contribution to foreign policy analysis." -- Patrick James, Dornsife Dean's Professor of International Relations * University of Southern California *

Alex Mintz is Director of the Institute for Policy & Strategy (IPS) and Agam Professor at the Lauder School of Government, Interdisciplinary Center, Herzliya (IDC).Carly Wayne is a Ph.D. candidate at the University of Michigan.

Contents and Abstracts1The Polythink Syndrome chapter abstractIn this chapter, we introduce the Polythink phenomenon, using the contrasting examples of Pearl Harbor and September 11 to demonstrate the critical effect that group dynamics can have on national security policy. We explain how Polythink is essentially the opposite of Groupthink on a continuum of decision making from "completely cohesive" (Groupthink) to "completely fragmented" (Polythink). We introduce the main symptoms and causes of Polythink and outline the organization of the book. 2Causes, Symptoms, and Consequences of Polythink chapter abstractIn this chapter, we outline the main symptoms, causes, and consequences of the Polythink phenomenon. We also introduce key explanations and predictors of Polythink. We then show how analysts can assess whether Polythink or Groupthink exists in a group. Finally, we compare the Polythink dynamic with the Groupthink dynamic and with a dynamic we call Con-Div, the middle point between these two extremes. 3Polythink in National Security: The 9/11 Attacks chapter abstractThis chapter provides an in-depth review of the events leading up to the 9/11 attacks, analyzing the decision-making processes of key diplomatic and security decision-making groups, including the CIA, the Presidential Cabinet or advisory team, the State Department, and more, to assess the key signs and symptoms of Polythink that were present in the decision-making processes of these groups and ultimately contributed to the failure to prevent this staggering attack. 4Polythink and Afghanistan War Decisions: War Initiation and Termination chapter abstractIn this chapter, we analyze the group dynamics in the Bush and Obama Administrations that fundamentally shaped and guided their policy decisions regarding the entrance to and exit from the Afghanistan War. While the initial invasion period was characterized by a deeply ingrained Groupthink mentality that had been shaped by the traumatic and devastating September 11 attacks, the decision to withdraw from the war was fraught with internal divisions and discordant worldviews of the national security policy-making complex-a Polythink process that deeply inhibited the development of a cohesive strategy for the successful conclusion of the war. 5Decision Making in the Iraq War: From Groupthink to Polythink chapter abstractIn this chapter we continue our analysis of the detrimental effects of flawed group decision-making processes surrounding decisions of war and peace. Specifically, using the Iraq War as a case study, we analyze the implications of Groupthink and Polythink on decisions made by the U.S. government in this controversial theater. Breaking down the group dynamics in the Bush and Obama Administrations, we demonstrate the effects of the decision-unit group dynamic on the decisions to initiate the war, adopt the Surge, and ultimately, withdraw from Iraq. 6Polythink in the Iranian Nuclear Dispute: Decisions of the U.S. and Israel chapter abstractThis chapter expands the range of national security decisions that can be affected by Polythink, examining the impact of Polythink on diplomacy, strategy, and negotiations. Specifically, we will assess the Obama Administration's 2009 Iran Policy Review concerning the Iranian nuclear program, and Israel's 2012 decision not to attack Iran's nuclear facilities. The chapter begins with the U.S. Administration's decision-making dynamic in addressing the Iranian threat during President Obama's first two years in office, specifically focusing on Obama's 2009 Iran Policy Review. In the second section, we analyze the decision-making processes that occurred in the Israeli government regarding the Iranian nuclear program in early 2012 as the government weighed a military strike on Iran's nuclear facilities. Interestingly, we find that in the Israeli case, the Polythink dynamic was mainly triggered by disagreement among three sub-decision-making gro