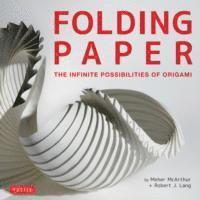 The Infinite Possibilities of Origami

av Meher Mcarthur, Robert J Lang
(1 röst)
Inbunden Engelska, 2013-08-01
209
Köp
Spara som favorit
Skickas inom 3-6 vardagar.
Fri frakt inom Sverige för privatpersoner.
This beautiful origami art book is a collection of the best contemporary pieces from some of the worlds most renowned papercraft artists. Thanks to pioneering masters such as Dr. Robert J. Lang, origami has transcended its humble roots as a traditional Japanese papercraft to take its place among the global fine arts. In Folding Paper: The Infinite Possibilities of Origami, Dr. Lang and Asian art curator Meher McArthur chronicle origami's remarkable evolution and showcases the widespread applications of paper folding solutions in the fields of contemporary mathematics, engineering, design, and the international peace movement. Based around a groundbreaking museum show by the same name, Folding Paper features the work of more than forty leading origami artists from around the world. It traces the development of paper folding in both the East and the West, recognizing the global influences on this international art form. Now in the early twenty-first century, origami is a sophisticated fine art form consisting of many different styles, from representational to geometric, abstract, and even conceptual. It has become a symbol of peace, an inspiration for engineers, and a conduit for scientific advancement. Featured origami artists include: Brian Chan Erik Joisel Erik and Martin Demaine Tomoko Fuse Daniel Kwan Michael LaFosse Jeannine Moseley Akira Yoshizawa Combining Dr. Lang's and McArthur's illuminating narrative history with lavish color photographs of more than sixty breathtaking works--from Joel Cooper's haunting Cyrus mask to Linda Tomoko Mihara's delicate Crane Cube to Eric Joisel's lifelike Pangolin model--Folding Paper is an enthralling introduction to the contemporary art of paper folding.
Visa hela texten

"Origami isn't just child's play. It is a respected contemporary art form and an inspiration to scientists and engineers. Heck, the principles of origami were applied in the development of airbags for cars. "Folding Paper: The Infinite Possibilities of Origami" (Tuttle) by Meher McArthur, a curator of Asian art, and Robert J. Lang, a physicist turned origami artist, presents dozens of photographs of dazzling creations. The artworks run the gamut from representational (a dinosaur) to geometric (a spiked rhombic) and abstract. "Folding Paper" is a primer on the premier artists and the influence of this very old art form in modern research and design labs." --The Boston Globe "The variety and breadth of the medium are amazingly clear. Animals (including a stunning ball variation on paper cranes), abstract forms, even a house, all dazzle and will inspire artists. The text of the book is mostly academic, but Lang's essay on the math and physics of origami may intrigue some readers, especially when they are left gaping by the overwhelmingly complex, computer-generated "circle packing" he employs to create a grid for folding on paper. Readers are mostly here for the photos, and they are well worth the very reasonable price." --Publishers Weekly "Have you ever wondered how extreme origami can be? These examples from the book Folding Paper: The Infinite Possibilities of Origami will blow your mind with their intricacy and technique." --CraftFoxes blog

Dr. Robert J. Lang has studied origami for more than forty years. He is recognized as one of the world's leading masters of the art--and one of the pioneers of the marriage of origami with mathematics and science. Lang authored or coauthored thirteen books and lectures widely on origami and its applications. Meher McArthur is a freelance Asian art curator, author, and educator. Her publications include Reading Buddhist Art: An Illustrated Guide to Buddhist Signs and Symbols; The Arts of Asia: Materials, Techniques, Styles; An ABC of What Art Can Be; and Confucius: A Throneless King. She lives with her family in Los Angeles. International Arts and Artists was established in 1995. The non-profit organization has become one of the largest providers of fine art exhibitions in the world, presenting 450 exhibitions at more than 300 museums, galleries and cultural institutions in 49 states and 6 foreign countries.