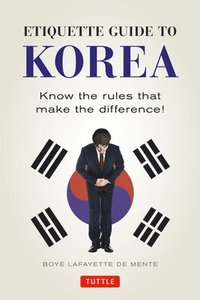 Know the Rules That Make the Difference!

av Boye Lafayette De Mente, David Lukens
Häftad Engelska, 2017-10-01
129
Köp
Spara som favorit
Skickas inom 3-6 vardagar.
Fri frakt inom Sverige för privatpersoner.
Finns även som
Visa alla 1 format & utgåvor
Farewell to faux pas! South Korea is one of the greatest economic success stories of the past 60 years, and more and more Westerners are traveling to this bustling, modern country for business and pleasure. But no matter why you visit, an understanding of Korea's etiquette and culture is essential to an enjoyable and successful trip. With Etiquette Guide to Korea, you'll never need to worry about making an embarrassing mistake this authoritative guide covers everything the courteous traveler needs to know, including the importance of names and how to use them, shaking hands versus bowing, table manners for celebrations and everyday meals, and how to negotiate in Korea. Also included are invaluable lists of Korean vocabulary and helpful phrases, making this book the most important item you can pack for your trip or extended stay in Korea.
Visa hela texten

Boye Lafayette de Mente has been involved with Japan, China and Korea since the late 1940s as a member of a U.S. intelligence agency, student, trade journalist, and editor. His many books include Korean Business Etiquette, Instant Korean and Surviving Korean. David Lukens is a human geographer specializing in South Korea. He lived in Seoul for six years, working as an English teacher for multinational corporations and later starting his own translation business. Currently, he splits his time between teaching in New England and researching in South Korea.