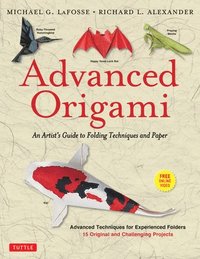 av Michael G Lafosse, Richard L Alexander
Häftad Engelska, 2017-04-01
199
Köp
Spara som favorit
Skickas inom 3-6 vardagar.
Fri frakt inom Sverige för privatpersoner.
Take your paper folding to an advanced level with this user-friendly origami book. From shimmering hummingbirds to magnificent bats, from a stunning panther mask to graceful sea turtles, Michael G. Lafosse's complex and beautiful origami projects are well known around the world. Focusing on models from nature, Advanced Origami provides unparalleled instruction on how to create master-class level 3D origami paper folding projects. The origami designs are challenging they require some folding experience but the results are more origami art than craft. Paper folders will create projects that can be displayed or given as gifts. Sophisticated origami or paper crafts fans will appreciate the unique origami designs along with complete detailed instructions and easy-to-follow colour photos and diagrams. Advanced Origami also features information on paper selection and preparation, advance techniques such as wet folding, and making your own paper.This origami book contains: 136 page, full-color book 15 original and challenging projects Step-by-step instructions Colorful diagrams and photographs Advanced techniques and tipsIn recent years origami has evolved beyond simple folding and creasing into a true art form akin to sculpture. For those seeking to learn origami at such a level, Advanced Origami provides all the essential information and techniques. Soon you will be able to design and fold your own origami sculptures! Origami projects include: North American Cardinal Koi Fish Origamido Butterfly Pond Frog And many more About this new edition:This updated edition contains a new introduction and DVD video lessons for 15 original projects.
Visa hela texten

"Overall, I am quite impressed at how much content this book offers. Any origami enthusiasts would enjoy not only the 15 beautiful models but also the special techniques that aren't offered elsewhere. It seems like such a bargain at less than $20!" --Yuki's Origami blog "This classic work blends elegant design with stunning execution and clear, detailed instructions. Every origami artist should have this in their library." --Robert J. Lang, author of Origami Design Secrets and co-author of Folding Paper "Creating origami art takes more than perfecting folding techniques; it also takes an understanding of the quality of paper and a vision of what can be done. This is an excellent book for advanced high school students, as well as students working at the college or university level." --Art & Activities Magazine "Michael and Richard are masters of this beautiful and timeless art form. I love the passion and joy for origami that they convey in this original and inspirational book." --Sok Song, author of Crease + Fold and Origami Chic "A must-have addition to any origami enthusiast's bookshelf." --Won Park, author of Dollar Origami and Dollar Battle-Gami "LaFosse displays a depth of artistry with his masterful folds and complementary methods to prepare the perfect piece of paper." --Mark Kirschenbaum, author of Creative Origami Kit and Color Origami: Botanica

Michael G. LaFosse has been an origami artist for decades, and is considered a leading authority and master of the art. An avid teacher, LaFosse co-founded the Origamido Studio, a learning center and design studio dedicated to the art of origami, and the only place in the world specializing in hand papermaking for the origami artist. Origamido also produces folded art and commercial designs for a variety of international clients. LaFosse co-curated Origami Now!, a wildly popular, year-long exhibition at the Peabody Essex Museum in Salem, Massachusetts. Vanessa Gould prominently featured LaFosse in the Peabody Award-winning film, Between the Folds. Richard L. Alexander co-founded the Origamido Studio with Michael G. LaFosse in 1996. He has been the chief papermaker, holding workshops since 2003, and is a frequent collaborator with other famous paper artists. He holds a degree from Cornell University in biology (systems ecology), where he also studied landscape architecture and design. He has consulted with apparel, container, toy and consumer product designers to incorporate folding theory into familiar daily use objects. Together, Alexander and LaFosse have created dozens of origami exhibitions, and over 75 books, kits and videos about paper and paper arts.