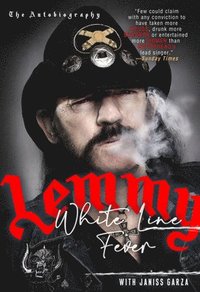 av Lemmy Kilmister
(2 röster)
Häftad Engelska, 2004-01-01
169
Köp
Spara som favorit
Skickas inom 5-8 vardagar.
Fri frakt inom Sverige för privatpersoner.
One of music's most notorious frontmen leads a headbanging, voyeuristic odyssey into sex, drugs, and rock 'n' roll that rivals Motley Crue's The Dirt and Aerosmith's Walk This Way. He made Keith Richards look like a choirboy and Mick Jagger look like a nun. And as the head of the legendary band Motorhead, he ploughed his way through so many drugs, so many women, and so much alcohol, that he gave a whole new meaning to the term Debauchery. And he changed the face of music, conquering the rock world with such songs as "Ace of Spades," "Bomber," and "Overkill" and inventing a whole new form of music--speed metal. At the age of 57, Lemmy Kilmister remains a rock icon, both for his monumental talent and his hedonistic lifestyle. In White Line Fever, he recounts his incredible, pleasure-filled, and death-defying journey through music history. Born on Christmas Eve, 1945, in Wales, to a vicar and a librarian, Ian Fraser Kilmister learned early, he as he forthrightly puts it, "what an incredible pussy magnet guitars were." A teenager at the birth of rock 'n' roll, Lemmy idolized Elvis and Buddy Holly and soon joined a band of his own. He would eventually head to London, where he became a roadie for Jimi Hendrix, played in Opal Butterfly, and joined space rockers Hawkwind's lineup in 1971. Four years later, speedfreak Lemmy was fired from the band for doing the wrong drugs. Vowing to form the "dirtiest rock 'n' roll band in the world," he formed Motorhead, arguably the heaviest and loudest heavy metal band to ever take the stage. During their twenty-seven-year history, Motorhead would go on to release twenty-one albums, including the #1 record No Sleep 'Til Hammersmith and would earn a Grammynomination. Lemmy would also cheat death on more than one occasion, most notoriously in 1980, when his doctor told him, "I cannot give you a blood transfusion because normal blood will kill you...and your blood would kill another human being, because you're so toxic." But thr
Visa hela texten