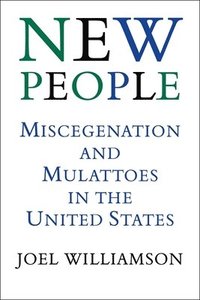 Miscegenation and Mulattoes in the United States

av Joel Williamson
Häftad Engelska, 1995-10-01
299
Köp
Spara som favorit
Skickas inom 7-10 vardagar.
Gratis frakt inom Sverige över 159 kr för privatpersoner.
New People is an insightful historical analysis of the miscegenation of American whites and blacks from colonial times to the present, of the ""new people"" produced by these interracial relationships, and of the myriad ways in which miscegenation has affected our national culture. Because the majority of American blacks are in fact of mixed ancestry, and because mulattoes and pure blacks ultimately combined their cultural heritages, what begins in the colonial period as mulatto history and culture ends in the twentieth century as black history and culture. Thus, understanding the history of the mulatto becomes one way of understanding something of the experience of the African American. Williamson traces the fragile lines of colour and caste that have separated mulattoes, blacks, and whites throughout history and speculates on the effect that the increasing ambiguity of those lines will have on the future of American society.
Visa hela texten

In this splendid book, Williamson ranges widely and confidently over cultural, literary, and social sources to follow the twisting course of miscegenation and racism in America. . . . Williamson's graceful style and cogent arguments . . . make this a major essay on American character.-- "Library Journal" Joel Williamson has courageously undertaken to write the first general history of mulattoes in the United States. Why has it taken so long?-- "American Historical Review" Williamson's book is impressive for its chronological scope and for its attempts to examine the importance of color in historical perspective.-- "The Historical Journal" In New People, Joel Williamson has tackled the most difficult and sensitive topic in the history of American race relations. It is beautifully written and infused with a kind of deep feeling and human concern that is too often lacking in scholarly works on race relations.-- "Reviews in American History"

Joel Williamson is Lineberger Professor in the Humanities at the University of North Carolina at Chapel Hill. He is the author of several books, including After Slavery: The Negro In South Carolina During Reconstruction, 1861-1877; The Crucible of Race: Black-White Relations in the American South Since Emancipation; and William Faulkner and Southern History.