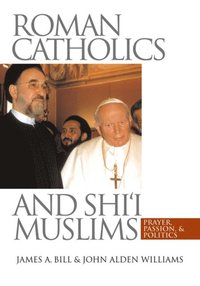 Without denying these differences, the authors of this book reveal a number of interesting linkages between Roman Catholicism and Twelver Shi'ism. They compare the histories of the two faiths, consider parallels between important figures in each, and highlight the doctrinal, structural, and sociopolitical similarities they share. Balanced in tone and carefully researched, the book helps explain the essence of both traditions while enriching our understanding of each.

There are an estimated 140 million Twelver Shi'is in the world today. The highest percentages live in Persian Gulf countries, including Iran and Iraq, and in Azerbaijan, Lebanon, and Afghanistan. Sizable numbers also inhabit Pakistan, India, and Turkey. The largest Christian denomination, Roman Catholicism is present across the globe, though its population of more than one billion people is concentrated in North and South America and in Europe.