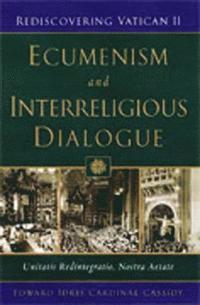 av Edward Idris Cardinal Cassidy
Häftad Italienska, 2005-09-01
239
Köp
Spara som favorit
Skickas inom 5-8 vardagar.
Fri frakt inom Sverige för privatpersoner.
Places the Council in dialogue with the church and her people and focuses on what Catholics need to know, not just historically. This first volume, of the eight-book series looks at the relationship of the Catholic Church with other Christian churches and other great religions.
Visa hela texten

Edward Idris Cardinal Cassidy holds a doctorate in Canon Law from Lateran University. In 1989, he was appointed as President of the Pontifical Council for Promoting Christian Unity and he became at the same President of the Holy See's Commission for Religious Relations with the Jews. Now retired, he lives in Australia.